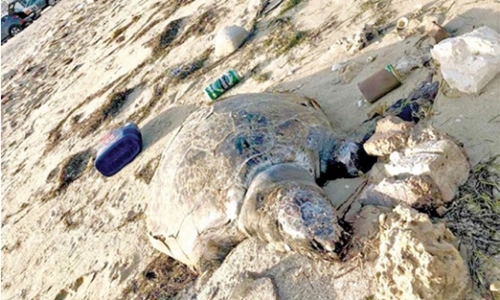 “The news of finding six dead sea turtles in just one week is alarming,” said Chairman of the Animal and Environment Welfare Society, Shaikha Marwa bint Abdulrahman Al Khalifa. The pictures of the dead turtles were widely circulated on social media networks. Shaikha Marwa said that preserving marine life is of utmost importance, urging the public as well as government bodies to work hand in hand to conserve the environment. He said that many countries have taken advanced steps to protect the marine life and that Bahrain should follow suit.

These frequent death of turtles have become a consistent challenge to the conservation efforts by Bahrain authorities. In April, five turtles belonging to an endangered species were returned to sea by the authorities. The turtles were found in poor health by some residents in the area and were taken to the authorities. “The turtles regained their health after being cared for a period of three months by a group of experts belonging to the Supreme Council for Environment and Bahrain Society for the Prevention of Cruelty to Animals,” the sources added.

Mahmoud Faraj, Chairman of the Bahrain Society for the Prevention of Cruelty to Animals, said that the turtles were returned to the sea near Hawar Islands in co-operation with the Supreme Council for Environment.  Three of the five turtles were received by BSPCA from residents who found them on different coasts in the Kingdom. The other two were received by the Supreme Council of Environment.

Meanwhile, the Interior Ministry announced yesterday that an investigation has been launched after 28 cows were allegedly poisoned to death in a farm in Hamala. According to reports from the area, the cows may have been poisoned. It is not clear who could have poisoned the cattle. The farm owner, MP Ahmed Al Demistani said that the farm belongs to him and that the alleged poisoning has cost him thousands of dinars.

The Interior Ministry has stated that it has launched an investigation after receiving a complaint. “Legal procedures were taken and and inspections have been done at the farm. Samples have been taken from the farm where the dead cattle was found. “The samples will be examined by the concerned department and the case document will be presented to the Public Prosecution.”

Clampdown on traffic violations near schools