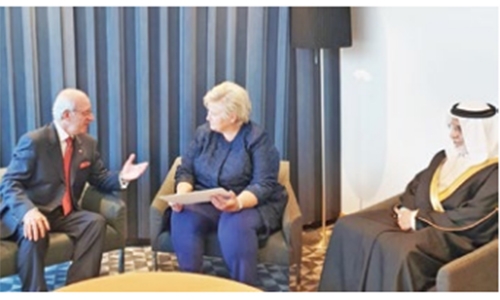 The Cabinet Affairs Minister presented the Norwegian Premier with a letter from HRH the Prime Minister on ways of boosting bilateral relations. The letter also included an invitation to visit the Kingdom of Bahrain. The Norwegian Premier expressed heartfelt thanks and respect to HRH the Prime Minister for the letter which embodies keenness to further enhance bilateral co-operation.

She also congratulated Bahrain on the United Nations’ proclamation of April 5 as the Universal Day of Conscience in response to His Royal Highness’s initiative to encourage peaceful solution of conflicts. She underlined the importance of the initiative in rallying the efforts of the international community to ensure a stable world where all people live in peace and security