Focus on local handicrafts | THE DAILY TRIBUNE | KINGDOM OF BAHRAIN 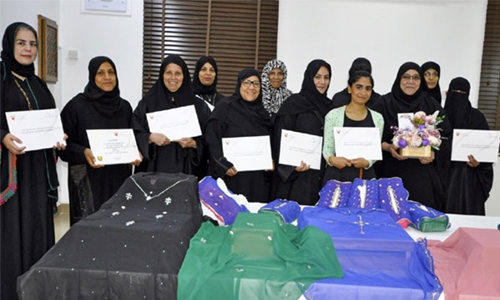 The Bahrain Tourism and Exhibitions Authority (BTEA), represented by the Handicrafts Directorate, distributed certificates to the participants of the ‘Anaqda’ workshop during the graduation ceremony held at Al Jasra Handicrafts Centre. The workshop was held as part of BTEA’s ongoing efforts to preserve Bahrain’s traditional crafts and industries, as well as ensuring the renewal and development of well-produced Bahraini products at a regional level, in order to maximise the contribution of the tourism sector in the gross domestic product (GDP).

The three-week workshop, which was attended by 11 trainees, included 60 hours of training with Zakiya Ali. The workshop aimed to train the attendees on the basic skills of ‘Anaqda’ embroidery, which is considered an old Bahraini craft where gold and silver threads are used in the embroidery of inscriptions on light fabrics. This embroidery technique was previously limited to women’s fashion and home décor, but has since developed significantly and entered into the manufacturing of many products used in everyday life such as greeting cards and other local handicraft goods.

The workshop shed light on the skills and techniques of embroidery, where the trainees were introduced to the special tools used in this art and trained on a series of stitches on canvas, as well as other techniques and topics related to this ancient craft. “This workshop has witnessed a great turnout and we are always keen on hosting such events that contribute to the preservation of traditional handicrafts and products to promote creativity among Bahraini trainees and highlighting their outstanding productions outside the Kingdom, as well as hone their skills and encourage them to achieve professionalism in their chosen fields to become trainers themselves which contributes towards the preservation of Bahraini crafts for future generations,” said the President of Al Jasrah Handicrafts Centre, Yasser Al Sayed.

The Bahrain Tourism and Exhibitions Authority continues to embrace initiatives that promote the local community and sheds light on the uniqueness of the Bahraini culture by highlighting the beauty of the country through popular local handicrafts both locally and regionally, in order to achieve the 2030 economic vision.