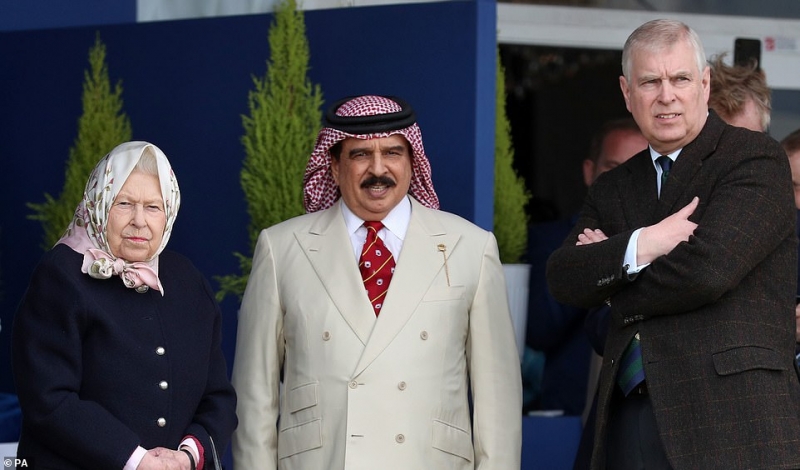 The meeting was held on the occasion of HM the King’s attendance of the international Royal Windsor Horse Show at an invitation by HM Queen Elizabeth II. HM the King and Queen Elizabeth II exchanged talks on outstanding historical relations between Bahrain and the UK and growing cooperation between both countries in various fields.

The five-day Royal Windsor horse show is a highlight in the Queen’s year and regularly attended by HM the King. HM the King also met the Duke of York His Royal Highness Prince Andrew as they watched the event, where the King Cup is named after His Majesty.

HM also met Sultan Ibrahim Ibni Almarhum Sultan Iskandar Al-Haj of Johor Province, Minister of State for European and African Affairs Sir Alan Duncan, members of the House of Lords and parliamentarians. HM King Hamad and Queen Elizabeth II watched part of the International Endurance Race, held over 120 kms with the participation of a number of jockeys from Bahrain captained by Representative of HM the King for Charity Work and Youth Affairs, Chairman of the Supreme Council for Youth and Sports (SCYS) and Captain of the Royal Endurance Team HH Shaikh Nasser bin Hamad Al Khalifa.

The five-day event, held in Berkshire, is now in its 76th year and attracts well-heeled visitors from all over the world. Jessica Springsteen, an American show jumping champion rider and daughter of rock legend Bruce  Springsteen, was one of the competitors at the esteemed event, showing off her skills on her horse Fleur De L’Aube. Last year, the event fell exactly a week before the royal residence hosted the wedding of the Duke and Duchess of Sussex.

The event sees competitors taking part in a range of events from show jumping to dressage, along with displays from The King’s Troop Royal Horse Artillery and DAKS Pony Club - and is the only occasion on which members of the public can enjoy the palace grounds. The Queen, reports said, is believed to have attended every single year since it began as a wartime fundraising event back in 1943.

According to Daily Mail, the event is intrinsically linked with the royal family; both the Queen and the Duke of Edinburgh competed at it during their younger years, with Prince Philip entering the Carriage Driving at Royal Windsor Horse Show for 30 years, winning it just once in 1982. In more recent years, the Queen has watched many of her horses take part in the showing class competitions.