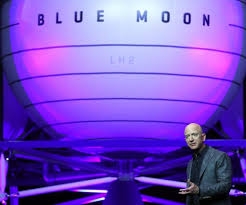 Jeff Bezos, who heads both Amazon and space company Blue Origin, unveiled a lunar lander Thursday that he said would be used to transport equipment, and possibly human beings, to the south pole of the Moon by 2024. “This is Blue Moon,” he said at a presentation in Washington, as curtains lifted to show a mockup of a huge vessel weighing many tons and able to carry four self-driving rovers. “It’s an incredible vehicle, and it will go to the Moon,” he declared.

The vehicle has been under development for the past three years, he said. It will be capable of carrying scientific instruments and also rovers for humans. The goal is to land on the Moon’s south pole, where ice deposits were confirmed in 2018.

Water can be exploited to produce hydrogen, which in turn could fuel future exploration of the solar system. Fully loaded with fuel, Blue Origin will weigh some 33,000 pounds (15,000 kilograms), which will decrease to about 7,000 pounds when it is about to land, he said.

No joke: Denmark to cut kids off from laughing gas