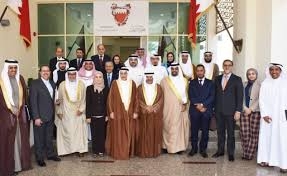 The Financial and Economic Affairs Committees at the Shura and Representatives Councils held yesterday its first joint meeting with the government’s representatives to discuss a draft law to endorse the state’s general budget for the fiscal years 2019-2020. The meeting was chaired by Representatives Council Speaker Fawzia Zainal, in the presence of Shura Council Chairman Ali Al Saleh and Deputy Prime Minister Shaikh Khalid bin Abdulla Al Khalifa, the Head of the Ministerial Committee for Financial and Economic Affairs and Fiscal Balance.

The Representatives Council Speaker stressed that the royal directives of His Majesty King Hamad bin Isa Al Khalifa, included mainly in his address in the opening of the first session of the fifth legislative term, will always serve as a roadmap in serving the nation and citizens. She praised co-operation with the government led by HRH Prime Minister Prince Khalifa bin Salman Al Khalifa and HRH Prince Salman bin Hamad Al Khalifa, the Deputy King.

She noted that positive co-operation between the legislative and executive branches, the spirit of consensus and complementarity, taking into consideration the supreme interest of the nation, catering to citizens’ needs, preserving achievements, ensuring continuity of the direct subsidisation programme for eligible citizens while taking into account current challenges will contribute to achieving set up goals from the state’s general budget draft law, the Government’s Action Plan and plans to boost the economic situation.

The Shura Council Chairman stressed the need for continuous cooperation between the legislative and executive branches to carry out the state’s general budget project for 2019-2020, reach a consensual result that meets the aspirations of HM the King’s leadership and citizens and back the efforts to achieve financial balance. He pointed out that the exceptional circumstances surrounding endorsement of the budget necessitate hard work to ensure its rapid implementation.

He added surmounting the circumstances is a joint responsibility and all have to work as one team. He expressed hope the efforts made by all parties will lead to a budget that takes into consideration first and foremost the supreme national interest.

Deputy Prime Minister Shaikh Khalid bin Abdullah Al Khalifa conveyed the greetings of HRH the Premier and HRH the Deputy King, stressing that discussing the state’ s general budget project for the fiscal years 2019- 2020 will bring to Bahrain more growth and prosperity under the leadership of HM the King. He underlined the government’s keenness on ensuring cooperation and consensuses are the characteristic features of the meetings during which the budget will be discussed.