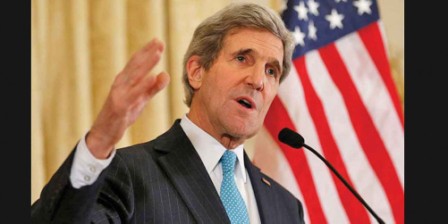 Deputy King calls up US Secretary of State

Deputy King, His Royal Highness Prince Salman bin Hamad Al Khalifa, yesterday held a telephone call with John Kerry, the Secretary of State of the United States. During the telephone conversation, His Royal Highness praised the longstanding ties between the Kingdom of Bahrain and the United States, and highlighted the deep level of cooperation between the two countries, which continues to grow across a wide range of areas.

On regional developments, His Royal Highness and Secretary Kerry discussed the two countries’ shared commitment to combat all forms of terrorism and violent extremism to achieve lasting peace, security and stability across the region.