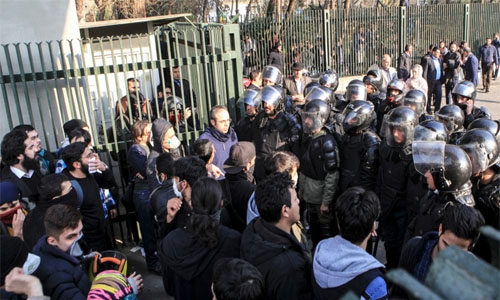 Dubai : Iranian security forces arrested some 3,700 people during widespread protests and unrest over the past two weeks, a lawmaker said yesterday, offering a far higher number than authorities previously released.

The demonstrations, which began Dec. 28 over economic grievances, quickly spread across the country to become the largest seen in Iran since the disputed 2009 presidential election. Some protesters called for the overthrow of the government, and at least 21 people were killed in clashes.

Human rights activists outside of Iran told The Associated Press they weren’t surprised by the figure as authorities also allegedly carried out so-called “preventative arrests” of students not involved in the protests. Some 4,000 arrests followed the 2009 protests.

Activists also said they had concerns about Iran’s prisons and jails being overcrowded and dangerous, pointing to allegations of torture, abuse and deaths that followed the mass arrests of 2009. The New York-based Center for Human Rights in Iran says at least three detainees arrested in the recent protests have already died in custody.

“Given the systematic rape and torture of detainees in 2009 in very overcrowded and inhumane conditions, we are extremely worried about the fate of these thousands of detainees and the lack of information and access by their families and lawyers,” said Hadi Ghaemi, the executive director of the center. “It is a very troubling situation.”

Mahmoud Sadeghi, a reformist lawmaker from Tehran, offered the new figures for those arrested in a report carried Tuesday by parliament’s official news website. Authorities previously spoke of hundreds of arrests in Tehran, while other provinces offered only piecemeal figures, if any at all.

Sadeghi said 3,700 was the best number he could immediately offer, given that various security forces around the country had been involved in the arrests. Iran put more police on the streets over the arrest, including anti-riot squads, while the paramilitary Revolutionary Guard also deployed its motorcycle-riding Basij volunteer force.

Interior Minister Abdolreza Rahmani Fazli previously said about 42,000 people at most took part in the anti-government protests. Sadeghi’s figure of arrested offered Tuesday would mean nearly 10 percent of those who demonstrated were arrested.

On Tuesday, authorities in Tehran released another 70 prisoners on bail after releasing an earlier batch of 70 on Sunday, Tehran prosecutor Abbas Jafari Dolatabadi said, according to the semi-official ISNA news agency.

Iranian authorities have said that the protests are waning. That’s in part due to the government blocking access to the popular messaging app Telegram, which demonstrators used to share images of the rallies and organize. It remains difficult for journalists and outsiders to piece together what’s happening beyond Tehran, as Iran is a vast country of 80 million and travel is restricted.

Similar mass arrests followed the Green Movement protests over voter fraud allegations in the 2009 re-election of President Mahmoud Ahmadinejad, a crackdown that saw dozens killed and others tortured in custody. Rape accusations levied against jailers at the time stunned Iran.

In these protests, the Center for Human Rights in Iran said it had documented the deaths of three detainees. One died at Tehran’s Evin prison in a reported suicide. Another man detained in Arak, 235 kilometers (150 miles) southwest of Tehran, also died. His family said their son’s body bore an enormous head wound “as if he had been hit with an ax,” the center said.

Late Tuesday, Iran’s judiciary acknowledged a death in Arak via its Mizan news agency, saying an unnamed detainee committed suicide. The center alleges a third detainee died in custody in Dezful, 460 kilometers (285 miles) southwest of Tehran. While Iranian media has quoted a lawmaker on the Evin prison death, the death in Dezful had not been reported as of Tuesday.

Some university students separately have been arrested even though they haven’t taken part in the demonstrations, said Nassim Papayianni, a London-based researcher on Iran for Amnesty International. She said authorities have described those arrests as “preventative.”

The mass arrests raise questions about those detained receiving legal assistance and proper care while in custody, she said.

We work perfectly together