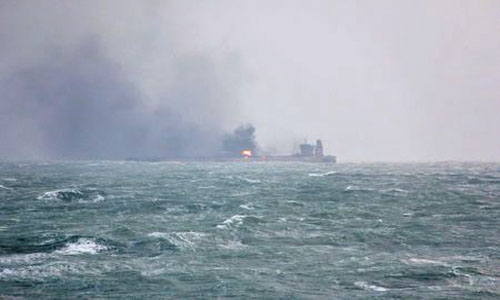 Beijing/Seoul : Strong winds, high waves and toxic gases are hindering dozens of rescue boats struggling to locate missing sailors from a stricken oil tanker in the East China Sea and to extinguish a fire that has burned for the past three days on the ship.

The poor conditions, with rain and waves as high as 3 meters (10 feet), frustrated efforts to tame the fire and search for the 31 remaining tanker crew members, China’s Ministry of Transport said in a statement on Tuesday.

The flames were forcing the South Korean Coast Guard’s search and rescue team to stay as far as 3 miles (4.8 km) away from the tanker, two South Korean officials told Reuters.

The Chinese government said late on Tuesday it had not found a “large-scale” oil leak, and the ultra light oil, known as condensate, was burning off or evaporating so quickly it would leave little residue - less than 1 percent - within five hours of a spill. That reduces the chances of a crude-style oil slick.

The tanker Sanchi (IMO:9356608), run by Iran’s top oil shipping operator, National Iranian Tanker Co, collided on Saturday with the CF Crystal (IMO:9497050), carrying grain from the United States, about 160 nautical miles (300 km) off China’s coast near Shanghai and the mouth of the Yangtze River Delta.

The Sanchi was carrying 136,000 tonnes of condensate to South Korea, equivalent to about 1 million barrels and worth about $60 million.