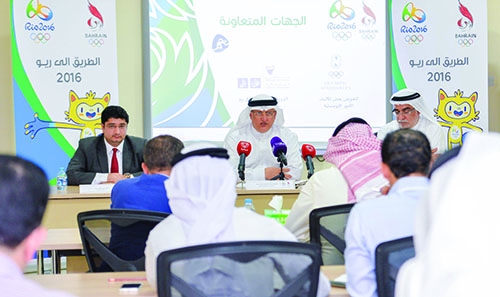 Manama: A record 30 Bahraini athletes so far are set to compete in the 2016 Summer Olympic Games in Rio de Janeiro, Brazil.

The Kingdom will take part in four disciplines, where 26 have qualified for the athletics events, two in swimming, and one each in shooting and wrestling.

HH Shaikh Nasser bin Hamad Al Khalifa, representative of His Majesty the King for Charity Work and Youth Affairs, Supreme Council for Youth and Sports Chairman, and Bahrain Olympic Committee President, will be heading Bahrain’s delegation to the Olympics.

This was announced in a Press Conference held at the committee premises, where BOC general secretary Abdulrahman Askar and chef de mission Yousif Abdulqader revealed the updated delegation of athletes for this summer Olympics.

Bahrain’s line-up features the cream of its fast and long-distance runners, who succeeded qualifying times to secure their spots at the upcoming Games in August.

There will be 12 men and 14 women competing in the athletics events and leading the medal hunt will be Oluwakemi Adekoya, who won the women’s 400m gold medal at this year’s IAAF World Indoor Championship in Portland, US.

The nation will also pin hopes on the likes of rising athlete Salwa Naser, winner of the 2016 Asian Indoor Championship in Doha. She will be joined by other prominent athletes like Benson Seurei, Abbas Abubaker and Ruth Jebet.

Adam Batirov, winner of this year’s Asian Wrestling Championship in Thailand, will be spearheading Bahrain for the first time at the Olympics.

The 31-year- old veteran wrestler hopes to continue his impressive run, but this time on a higher level this summer when he faces some of the world’s best in the under-70kg weight category.

Bahrain were awarded three wild cards, which were given to three of its young talents – Mahmood Haji (Shooting), Al Zain Tareq and Farhan Saleh (Swimming).

Abdulqader Askar also expressed his pride at the record number of athletes who will represent Bahrain at the Olympics and also shared the same confidence in Bahrain improving on their record, following the success of Maryam Jamal, who won the women’s 1,500m silver at the 2012 Olympics, which was Bahrain’s only medal in London.

Askar along with other representatives of the committee, will fly to Doha later this month to present the final list of Bahrain’s official delegation to Rio de Janeiro.