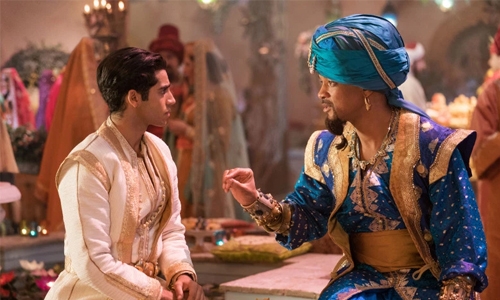 Aladdin is a 2019 American musical fantasy film produced by Walt Disney Pictures. Directed by Guy Ritchie, who co-wrote the screenplay with John August, it is a live action adaptation of Disney’s 1992 animated film of the same name, which is based on the eponymous tale from One Thousand and One Nights. The film stars Will Smith, Mena Massoud, Naomi Scott, Marwan Kenzari, Navid Negahban, Nasim Pedrad, Billy Magnussen, and Numan Acar, as well as the voices of Alan Tudyk and Frank Welker.

The plot follows Aladdin, a street urchin, as he falls in love with Princess Jasmine, befriends a wish-granting Genie, and battles the wicked Jafar. On review aggregator website Rotten Tomatoes, the film holds an approval rating of 57% based on 337 reviews with an average rating of 5.89/10. The site’s critical consensus reads, “Aladdin retells its classic source material’s story with sufficient spectacle and skill, even if it never approaches the dazzling splendor of the animated original.”

On Metacritic, the film has a weighted average score of 53 out of 100 based on 50 critics, indicating “mixed or average reviews.” Audiences polled by CinemaScore gave the film an average grade of “A” on an A+ to F scale, while those at PostTrak gave it an overall positive score of 90% (with an average 4.5 stars out of 5) and a 70% “definite recommend.” Writing for the Chicago SunTimes, Richard Roeper gave the film 3 out of 4 stars, praising Smith, Scott, and Massoud’s performances and calling it a “shining, shimmering live-action update.”

Variety’s Peter Debruge summarized his review with, “Will Smith steps into Robin Williams’s shoes, bringing fresh attitude to the role of the Genie in Guy Ritchie’s high-risk, mostly rewarding live-action remake.” A Mir Fantastiki review by Yevgeniy Peklo gave the film a score of 8/10, saying it was “probably the best Disney live-action remake up to date.” Despite praising the cast, William Bibbiani of TheWrap said of the film, “If you don’t think about it very hard (although you probably should), the remake of Aladdin might entertain you.

But you’d be a heck of a lot more entertained by watching the original film again. Or by going to a real-life parade. Or by doing some light gardening. Or by doing a crossword puzzle.” Chris Nashawaty of Entertainment Weekly gave the film a C+, lamenting that it did not add anything new to its 1992 animated predecessor; he felt that the film was unable to update the original’s questionable Middle Eastern characterizations, but nevertheless praised the performances of Smith and Scott.

France defiant in digital tax showdown with US at G7