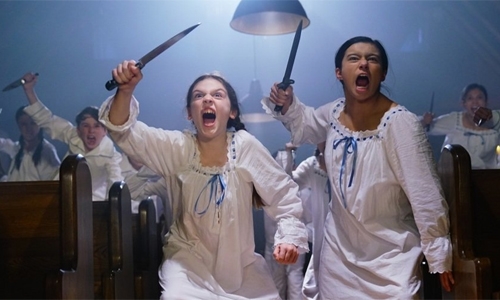 A priest, a piano prodigy, a stressed-out mother, a car crash survivor and a cheerleader-type walk into an empty movie house. They each watch as their greatest fears are played out on screen in “Nightmare Cinema,” a scattered but amusing horror anthology that gives five directors a whack at telling short, contained tales of terror, “Creepshow”-style.

“Nightmare Cinema” opens with “The Thing in the Woods,” a clever riff on a wooded massacre tale with Sarah Elizabeth Withers as a terrorized, bloodsoaked co-ed on the run from a maniac in a welding mask. Director Alejandro Brugués has a trick or two up his sleeve as the tale unfolds and takes an unexpected turn midway through.

“Mashit,” from “Midnight Meat Train” director Ryuhei Kitamura, takes a hilariously gruesome turn as a Father Benedict (Maurice Benard) goes to battle with a group of Catholic school kids. “Dead” finds “Critters 2’s” Mick Garris taking on the tale of a child flirting with the afterlife after his parents are killed; “This Way to Egress,” from “Bandersnatch” director David Slade, is the darkest, most accomplished chapter here, with Elizabeth Reaser as a mother struggling with reality after her husband leaves her.

“Gremlins” director Joe Dante weighs in with “Mirare,” a tale of nightmare plastic surgery. It’s after this chapter where we get the first glimpse of the Projectionist, played by Mickey Rourke, who ties the five segments together. That Rourke is introduced following a story of botched cosmetic work is its own sly joke; if you enjoy that riff, you’re already tuned to “Nightmare Cinema’s” vibe.

Jessica Simpson opens up about life after having 3 children