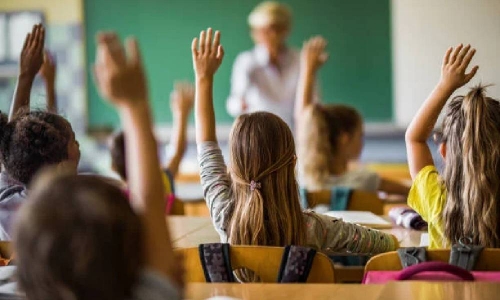 A teacher, apparently falsely accused by a parent through a viral video of attacking two students, turned out to be innocent in an investigation headed by the Education Ministry.

The teacher now stands cleared of all charges levelled against him.

Based on the evidence, the ministry said it awarded the student ten-day isolation and educational and disciplinary tasks within the school.

The ministry also referred the woman to the General Department for Combating Cyber Crime to take necessary legal actions for publishing false accusations against the teacher.

The ministry also called on the parents and social media users to exercise extreme caution while dealing with such incidents and report such incidents to the school administration before surmising that something may be true.

The ministry also urged all to refrain from publishing and sharing videos related to the incident citing the irreversible harm it will cause to school employees who work with honesty and dedication to the educational process.

The news also evoked several responses, with some social media users asking the ministry to tighten control over private schools. Another user, thanking the Ministry of Education for bringing out the truth, points out that several had falsely accused the teacher and sympathised with the video publishers without verifying its authenticity.

Education Ministry opened the investigation after a video published by a parent accusing a teacher of attacking her son and another student, who suffered bruises, went viral. Pursuantly, the Ministry of Education, represented by the Operations Department of the third educational district, contacted the parent.

As per the Instagram account of the Education Ministry, the incident reportedly occurred at Isa Town Primary Preparatory School. The ministry said it summoned the teacher and sent a team to the school to investigate the circumstances leading to the incident.

Investigators recorded the statements of the students involved in the video and took testimonies from other students and teachers who knew about the incident. Based on the evidence collected, the ministry confirmed it didn't find any evidence against the teacher for beating up the students.

The investigators, however, said that, on the contrary, it was the student who offended the teacher, insulted and tried to provoke him. Investigators also accused the student of being a habitual offender, citing records of his hostile behaviour towards other students in the school.

The ministry also said that the investigation showed that the allegation raised by the second student in the video was also false. The bruises on his body, shown in the video, the student confessed, were old and not caused by the claimed attack.

Ministry said the same was confirmed by the student's parent when approached by the ministry's investigators. The parent, the ministry said, revealed that the photograph showing bruises was taken and posted online without their consent.