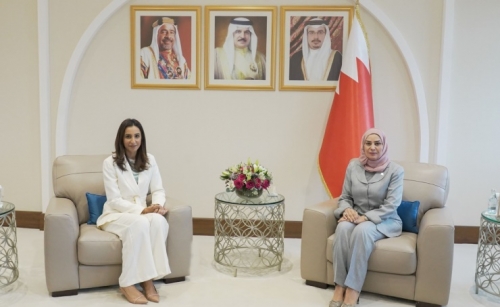 Taking care of sustainable development goals (SDGs) and harnessing constitutional and parliamentary tools for the sake of their implementation are a permanent priority.

The Speaker said that it is in line with the ongoing modernisation process during His Majesty King Hamad bin Isa Al Khalifa’s prosperous era, and based on the ambitious plans launched by the government, led by His Royal Highness Prince Salman bin Hamad Al Khalifa, the Crown Prince and Prime Minister, to achieve SDGs.

She commended the tremendous efforts being exerted by the Sustainable Development Ministry to achieve the kingdom’s goals, affirming parliamentary support for those endeavours. The Minister expressed sincere thanks to the Speaker for the meeting, praising the legislative branch’s support for government departments, hailing the ongoing executive-legislature cooperation and coordination to serve the royal vision regarding the achievement of SDGs.

Speaker Zainal congratulated Al Khulaif on her appointment by HM the King to her post.