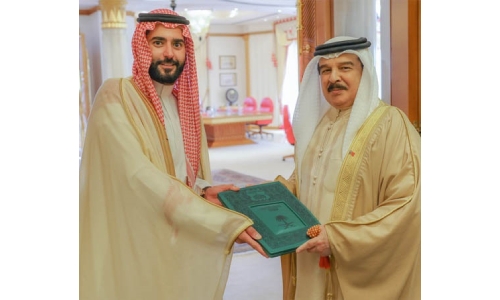 His Majesty King Hamad bin Isa Al Khalifa received a letter from Custodian of the Two Holy Mosques King Salman bin Abdulaziz Al Saud including an invitation to attend a joint summit between the GCC leaders, Jordanian Monarch, Egyptian President, Iraqi Prime Minister and the US President, which will be hosted by the Kingdom of Saudi Arabia next month.

The letter was handed over to HM the King by the Saudi Ambassador to the Kingdom of Bahrain, His Royal Highness Prince Sultan bin Ahmed bin Abdulaziz Al Saud, during a meeting with HM at Sakhir Place today.

HM the King expressed thanks and appreciation to the Custodian of the Two Holy Mosques for the invitation, praising solid historical fraternal relations between the two brotherly countries and peoples. He also lauded continuous cooperation and coordination at all levels.

HM commended the efforts of the Custodian of the Two Holy Mosques to further strengthen the Bahraini-Saudi relations and develop joint Gulf work. He also lauded his efforts to deepen relations and cooperation between brotherly people as well as promote security, stability and peace in the region.

HM the King wished the upcoming summit every success in attaining its goals of preserving regional security and stability, protecting the interests of brotherly countries, serving Arab issues and boosting strategic relations with the USA.