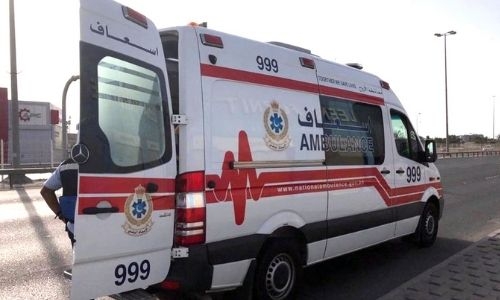 A pedestrian was killed after being hit by a vehicle yesterday on Shaikh Jaber Al Ahmad Al Sabah Street near East Riffa. The deceased was identified as 39-year-old Indian national Kalaiselvan Dakhnamoorthy. The Interior Ministry confirmed the accident in a tweet on Friday night. The Daily Tribune earlier reported that pedestrians are the most vulnerable when it comes to road accidents in the Kingdom. A report published by a division within the Ministry of Works has revealed that the maximum victims of road accidents in the past three years were pedestrians.

“The accident rate is the lowest in the Gulf region and the Middle East. This is because of the increasing steps to monitor wrong traffic practices apart from boosting awareness activities.” A study conducted two years ago revealed that despite the increase in the number of vehicles by 36 per cent in the last five years, the accidents in general reduced by 21.55pc and the fatal accidents by 30pc, while the fatalities dropped by 38pc and injuries-related accidents among drivers by 41pc and passengers by 52pc.

The General Directorate has always been highlighting the important role of the community in reducing traffic accidents by their traffic awareness and culture. He said that the department works within three main points; enhancing traffic safety through studies and reports, regulation of traffic on the roads and the enhancement of traffic services through e-facilities. The Director-General of Traffic, Brigadier Shaikh Abdulrahman bin Abdulwahab Al Khalifa, earlier revealed that traffic injuries and fatalities were reduced by 60pc after the implementation of a comprehensive traffic strategy.