Ties with Bahrain, closest and oldest, says US envoy | THE DAILY TRIBUNE | KINGDOM OF BAHRAIN 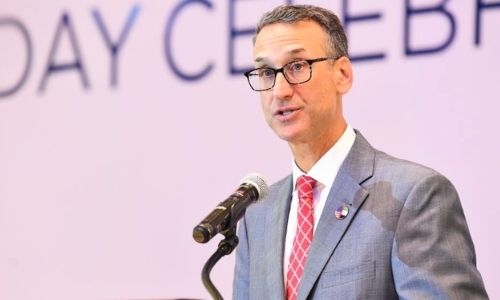 The US Ambassador to Bahrain, Steven Bondy, stressed yesterday the close relations between the two countries as amongst the “oldest and closest” in the region. In an interview published by Bahrain News Agency, Bondy said that the two countries are endeavouring to expand their partnership across all areas.

“We maintain close partnerships with the government of Bahrain on the full range of bilateral issues, from education and the arts to trade, investment, and security, with an emphasis on strengthening people-to-people ties,” he said.

The ambassador stressed the significance of the Free Trade Agreement (FTA) – one of only two in the Gulf region – in strengthening the bilateral trade and investment relationship. “Since coming into force in 2006, two-way trade in merchandise and services has more than tripled, from $782 million in 2005 to nearly $3 billion in 2018. Even during the disruption of the pandemic-induced economic downturn, trade exceeded $2 bn in 2021, up from $1.5 bn in 2020,” he said.

“We believe in expanding commercial relations with Bahrain as a US government priority, and we are here to support businesses interested in doing that.” The ambassador also emphas i z e d that “the US is and will continue to be Bahrain’s closest partner for advanced defence system s and equipment.”

“Such systems greatl y improve and enhance regional security, as do the high pace of bilateral and multilateral military exercises and training events. The United States and Bahrain both benefit from closer operational coordination.”

"The United States looks forward to initiating direct flights connecting the two countries," he said, adding that “together with the new 10-year multiple-entry visa for Bahraini citizens, we expect to turbo-charge business and tourism travel.” On the Bahrain-US relationship, he said Bahrain plays a 'key role' in the regional security architecture and is a vital ally in defence initiatives.

“We salute His Majesty King Hamad bin Isa Al Khalifa's bold decision to have relations with Israel via the Abraham Accords, which we believe represents a fundamental change of strategic orientation in the region,” he said.

The US embassy is working hand in hand with the Bahraini government “to ensure the people of Bahrain benefit from their relationship with Israel.” On the Bahrain-US Free Trade Agreement, he said FTA significantly strengthened the bilateral trade and investment relationship. “We believe in expanding commercial relations with Bahrain as a US government priority, and we are here to support businesses interested in doing that.”

Bahraini firms have been invited to the SelectUSA Investment Summit to be held in-person in Washington, DC, on June 26-29. He also pointed out that despite the disruption to trade growth caused by the pandemic-induced economic downturn, bilateral trade exceeded $2 billion in 2021, up from $1.5 bn in 2020.

The ambassador also highlighted Bahrain as one of the “most open economies in the Middle East and North Africa region, with strong trade relations within the GCC and beyond, excellent infrastructure and strong financial institutions.” Bahrain, he said, is well-positioned to host investors seeking access to local, regional, and international markets. The ambassador also congratulated Bahrain for being its first partner to operate the AH-1Z attack helicopters and “will be the first country to fly the next generation of the F-16 aircraft.” Bahrain, he stressed, is a Major Security Partner and Major Non-NATO Ally of the United States.

“In going forward, Bahrain and the US are consistently increasing our interoperability and streamlining communication and threat-sharing processes to deter and defend the unmanned systems and missiles. Additionally, we are breaking new ground in other realms, such as cyber-security and cyber-defence.”