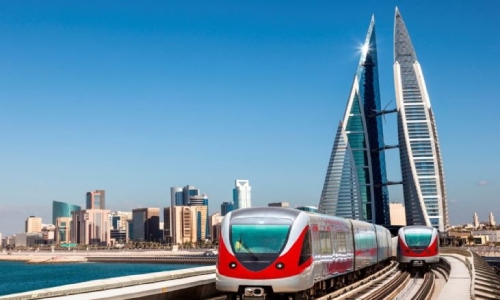 Phase one of the multi-billion dollar Bahrain Metro project has received the green light to go ahead. According to Kamal bin Ahmed Mohamed, the Minister of Transportation and Telecommunications, the project is up for tender.

The government is moving on to the tender stage, following a "highly" positive response from the private sector for a market consultation launched in March this year.

The announcement also follows a technical consultancy study on the feasibility of the extending Bahrain metro corridor from King Hamad Railway Station at Alramli area to the new sports City and the International Exhibition Centre at Sakhir area.

The plan is to develop a rail transport network on elevated rails, following international standards with a driverless GoA4 system operation. Phase one.

The Bahrain Metro Phase One represents the initial phase of an ambitious plan to develop a 109 km rail-based urban transit network with an elevated corridor on two lines.

The length of the first phase will be 29Km and include 20 stations on two lines. The first line will connect Airport to Seef District through Airport Avenue and King Faisal Highway.

The other line will connect Juffair to the Educational area in Isa Town through King Faisal Highway, passing by the Diplomatic Area and Bab Al Bahrain.

The passengers can transfer between the two lines in Bab al Bahrain and al Farooq Junction stations. In terms of capacity, the system is capable of carrying 43,000 passengers per hour.

The ministry expects passenger traffic in the initial few years of operation to be around 200,000 per day. Growth, the ministry said, is expected as more travellers shift from using their private cars to the Metro system. The entire project is estimated to cost US$2 billion.

The project, reportedly, will be procured through a twostage global and competitively bid public tender process comprising Request for Qualification (RFQ) followed by the Request for Proposal. The RFQ process, a Construction weekly report said, is expected to commence in November 2021.

The report said the project would be an integrated PPP with the selected private partner implementing the project on a DBFOMT (Design, Build, Finance, Operate, Maintain, Transfer) basis with a contract period of 35 years.

The demand risk, reportedly, will be borne by the government. "Private partners will receive availability-based payments along with performance-based deductions and incentives," the report said.

The government will provide a pre-determined amount as a construction grant to the project company to fund a small portion of the Capital expenditures, added the report.

The government has acquired the land required for the project, which the private partner would get at the start of the project. Bahrain, the report points out, have extensive experience in successfully procuring large infrastructure projects on a PPP basis.

4,000 medicines, medical materials out of stock in Bahrain