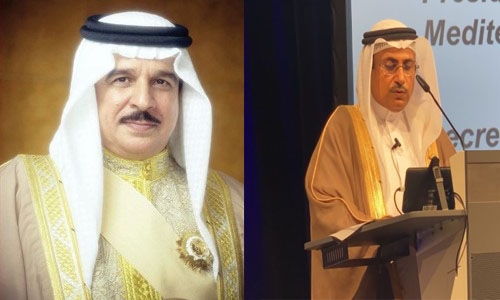 This came as Al Asoomi addressed the Parliamentarians’ Session, organised by the G20 Interfaith Forum in collaboration with the Global Council for Tolerance and Peace (GCTP0 in the Italian city of Bologna.

In his speech, Al Asoomi indicated that the landmark initiatives launched by HM the King in this field have laid global foundations for promoting dialogue and consolidating a culture of tolerance among religions and cultures.

He cited the “Kingdom of Bahrain’s Declaration” on religious tolerance, which was launched in 2017, as a global document committed to promoting religious freedom for all, as well as the establishment of the King Hamad Global Centre for Peaceful Coexistence in 2018.

The Arab Parliament Speaker added that Arab countries have launched and embraced numerous initiatives in this regard, such as the King Abdullah bin Abdulaziz International Centre for Interreligious and Intercultural Dialogue (KAICIID), the Document on Human Fraternity for World Peace and Living Together, signed in the UAE between Al Azhar Al Sharif and the Vatican, and the establishment of the Interfaith Dialogue Centre at the Egyptian Supreme Council for Islamic Affairs.

The session was moderated by Pier Ferdinando CASINI, former president of the Italian Chamber of Deputies and current Chairman of the Italian Group at the Inter-Parliamentary Union.