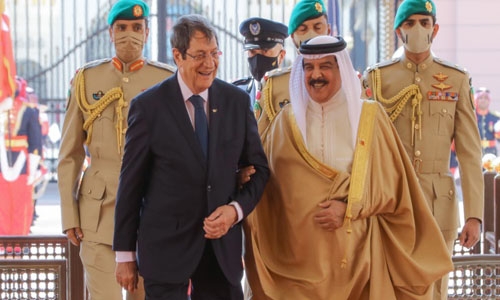 In the presence of His Majesty and the Cypriot leader, an agreement was signed between Bahrain and Cyprus on the exemption of visa requirements for diplomatic, special, and service passports holders to enable citizens from both countries holding those passports to enter or exit both countries, transit and reside without a visa. It was signed by Foreign Minister Dr Abdellatif bin Rashid Al Zayani and his counterpart Nikos Christodoulides. 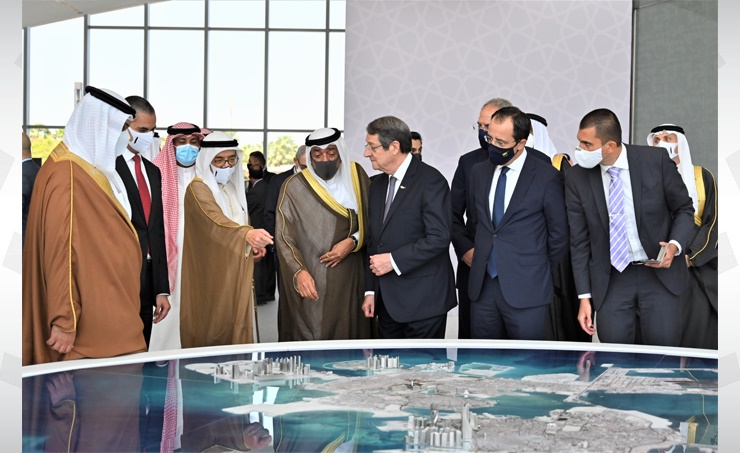 A Memorandum of Understanding on economic and technical cooperation was also signed by Finance and National Economy Minister Shaikh Salman bin Khalifa Al Khalifa and Cypriot Minister of Energy, Commerce and Industry Natasa Pilides. Upon arrival, the official reception protocols were held for President Anastasiades.

HM the King held talks with him in the presence of the two delegations as they discussed ways of boosting bilateral relations and cooperation in various fields.

His Majesty underlined the importance of the Cypriot President’s visit to Bahrain in fostering partnership in light of the promising investment opportunities existing in both countries. They exchanged views on regional and international developments and issues of common interest. 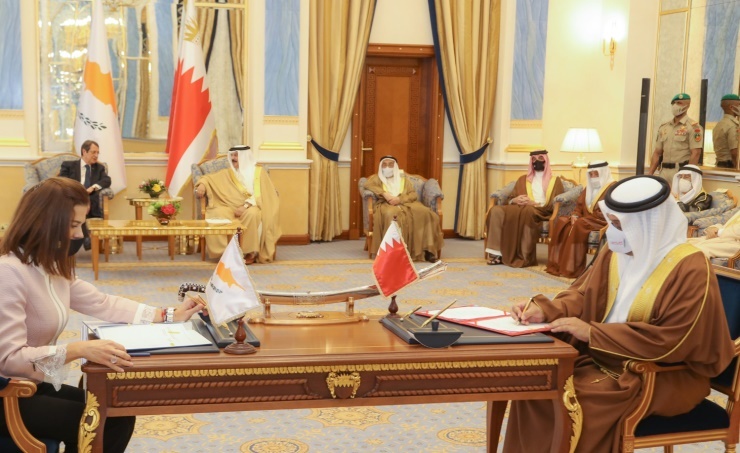 President Anastasiades expressed happiness about visiting the Kingdom and thanked HM the King for the gracious welcome and hospitality.

Meanwhile, Cyprus President Nicos Anastasiades and his accompanying delegation left Bahrain yesterday concluding a fruitful visit to the Kingdom of Bahrain and opening a new chapter of relations between the two countries.

Main highlights of President Anastasiades’ landmark visit was his meeting with His Majesty King Hamad bin Isa Al Khalifa, as well as the signing of key agreements to bolster bilateral ties and cooperation at various fields, and pledges by both countries for more exchange visits and investment opportunities. 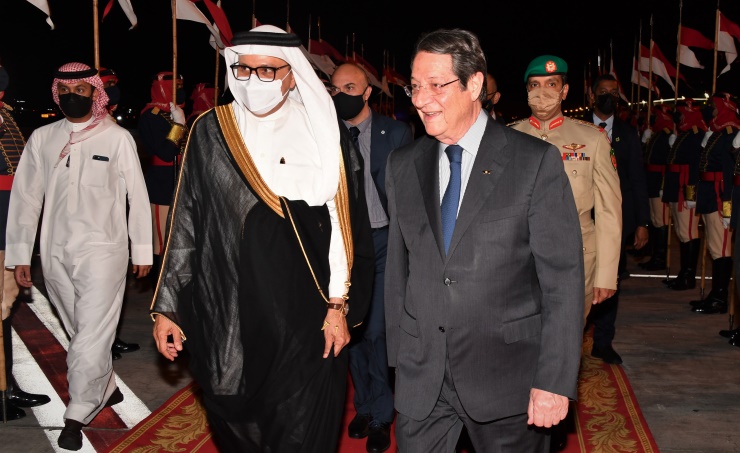 Dr Al Zayani held a session of talks with his counterpart, Nikos Christodoulides, within the framework of Anastasiades’ official visit. During the meeting, the two ministers reviewed the distinguished relations between Bahrain and Cyprus, their mutual appreciation and joint coordination, ways to develop bilateral cooperation in all political, economic and social fields.

They also discussed several topics of common interest on the regional and international arenas.

He noted steadily growing relations in the economic and trade fields, in particular, affirming Bahrain’s keenness on expanding cooperation and enhancing bilateral relations between the two countries. He made the statement after signing a Memorandum of Understanding on economic and technical cooperation with Cypriot Minister of Energy, Commerce and Industry, Natasa Pilides.

He stressed the importance of the agreement in supporting innovation, entrepreneurship and exchanging SMEs expertises, in addition to boosting the volume of non-oil trade exchanges and encouraging economic sectors and businessmen to take part in exhibitions in both countries. 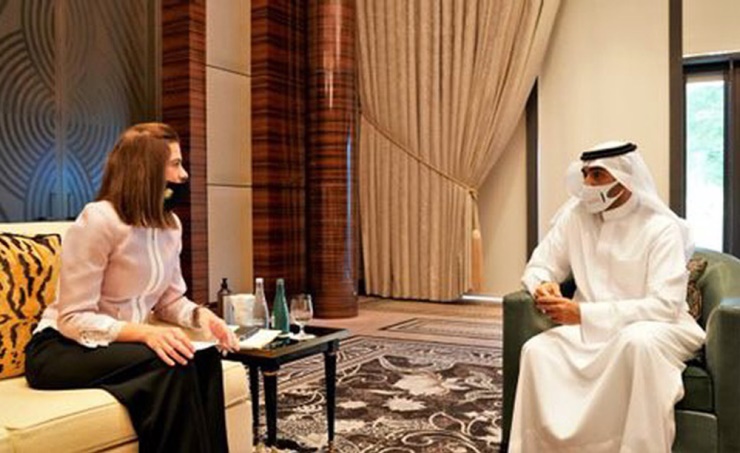 The meeting discussed ways of enhancing bilateral relations and investment cooperation and reviewed facilities and services provided to investors, and promising investment opportunities in the Kingdom. President Anastasiades was briefed on EDB’s role in promoting the Kingdom in various global markets and attracting direct investments and its strategic plan to achieve Bahrain’s Economic Vision 2030.

“We conducted a presentation about the economy of Bahrain, the incentives Bahrain offers for investors and the priority sectors. Bahrain offers 100 per cent ownership to foreign companies and repatriation of capital,” EDB Chief Executive Khalid Ebrahim Humaidan said at a media briefing.

Bahrain and Cyprus said they would work closely on exchange of expertise in agriculture, sustainable water management and preservation of marine resources.

This was stated during a joint press briefing held by the Minister of Works, Municipality Affairs and Urban Planning, Essam bin Abdullah Khalaf, and his Cypriot counterpart, Costas Kadis, Minister of Agriculture, Rural Development and Environment.

“The meeting was fruitful and we discussed various aspects of cooperation between the two friendly countries, particularly in the agricultural field and food security,” Khalaf said Khalaf also briefed Kadis on national initiatives adopted in Bahrain to develop the agricultural sector. 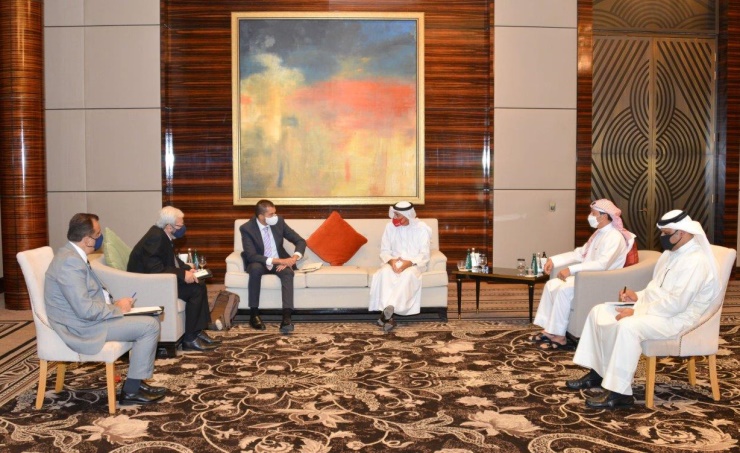 Industry, Commerce and Tourism Minister Zayed bin Rashid Al Zayani stressed the importance of boosting relations between Bahrain and Cyprus to promote development in both countries mainly in the industrial and commercial field. He was speaking as he met with Cypriot Minister of Energy, Commerce and Industry, Natasa Pilides, who was accompanying Anastasiades during his official visit.

The meeting was attended by Ministry of Industry, Commerce and Tourism Undersecretary Iman Ahmed Al Dosari and officials from both sides.

Oil Minister Shaikh Mohammed bin Khalifa Al Khalifa stressed the need to boost relations between Bahrain and Cyprus to achieve development and prosperity for the two friendly countries and peoples, and particularly cooperation and investment opportunities in oil and gas.

Shaikh Mohammed and Cyprus Energy, Commerce and Industry Minister Natassa Pilidou held a meeting. “I indicated that the oil sector in the Kingdom of Bahrain is a priority sector, and we discussed various promising opportunities to enhance cooperation between the two countries in this field,” Shaikh Mohammed told a media briefing following their meeting. 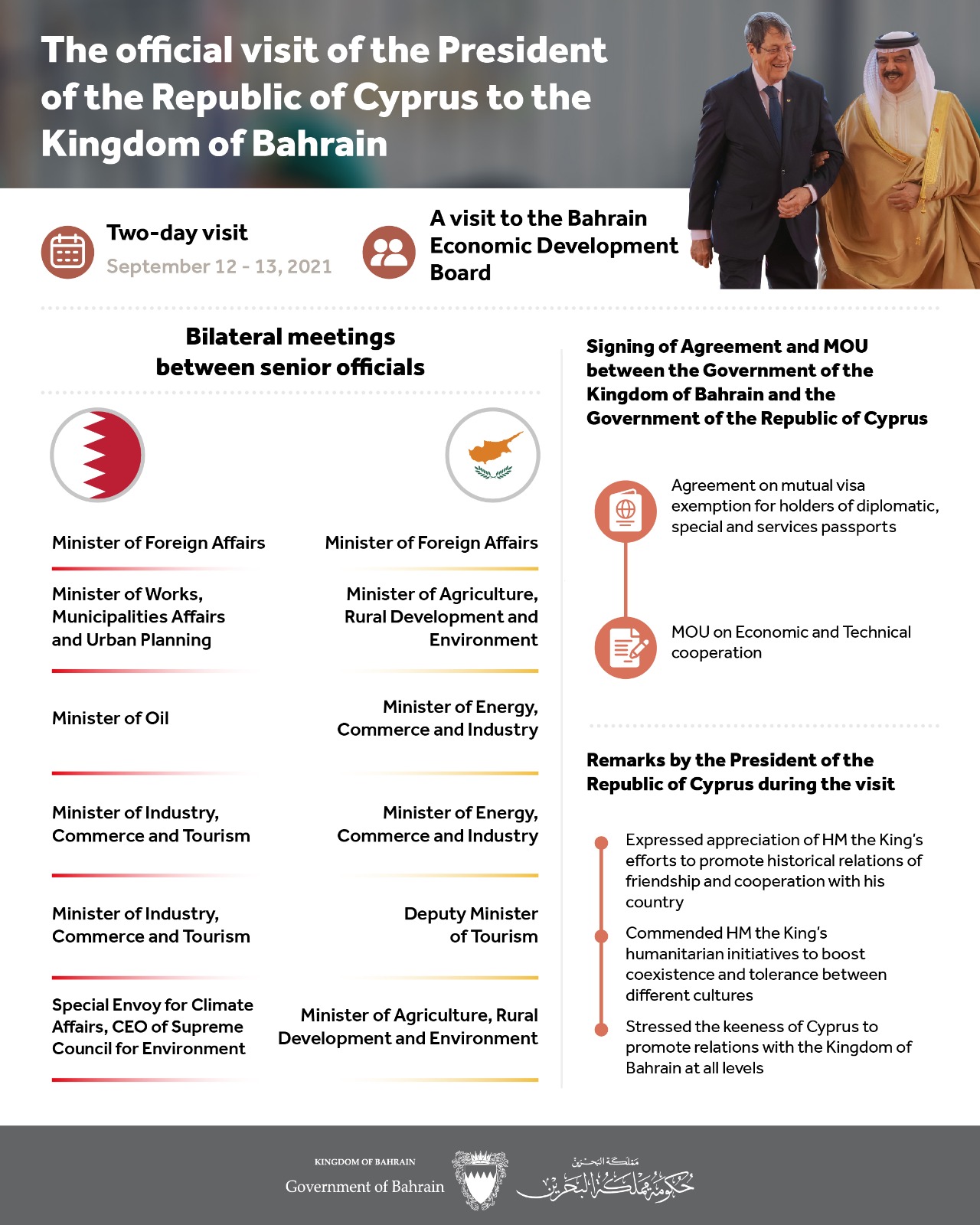