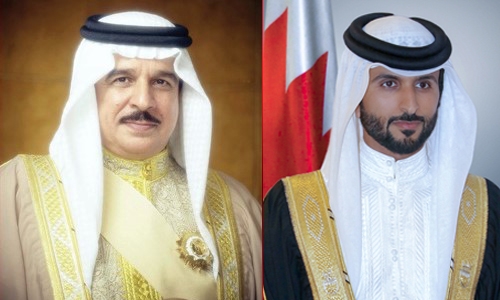 His Majesty King Hamad bin Isa Al Khalifa has shown great interest in protecting the health and safety of the citizens and residents in Bahrain since the outbreak of the coronavirus pandemic.

HM the King’s Representative for Humanitarian Work and Youth Affairs and Board of Trustees Chairman of the Royal Humanitarian Foundation (RHF), His Highness Shaikh Nasser bin Hamad Al Khalifa, lauded HM the King’s directives to allocate a big budget to protect human beings and the national economy, making Bahrain a pioneer in fighting the pandemic, which earned it the acclaim of the World Health Organisation.

HH Shaikh Nasser praised the efforts made by the government, led by His Royal Highness Prince Salman bin Hamad Al Khalifa, the Crown Prince and Prime Minister, and the National Medical Taskforce for Combating the Coronavirus to limit the spread of COVID-19 through the implementation of all world precautionary measures.

HH Shaikh Nasser made the statements marking one year since the launch of the “Feena Khair” campaign, and during his approval of the establishment of the “Feena Khair Laboratory and Research Centre for Infectious Diseases and Epidemiology”, costing BD3.5 million.

The medical facility will be financed from the Feena Khair campaign whose collected donations exceeded BD38 million. HH Shaikh Nasser lauded the remarkable success of the Feena Khair campaign and the unprecedented response of Bahrainis with it, paying tribute to the citizens, merchants, businessmen, banks, companies, associations and residents for their contributions to the fundraising campaign.

Dr Al Sayed expressed thanks and appreciation to all those who contributed to the Feena Khair campaign, noting that the campaign is moving towards achieving its goals. He indicated that the campaign has collected more than BD38 million since its launch on April 12, 2020.

He paid tribute to HH Shaikh Nasser for leading the Feena Khair Campaign and promoting the values of cohesion, solidarity and fraternity across the Bahraini society.