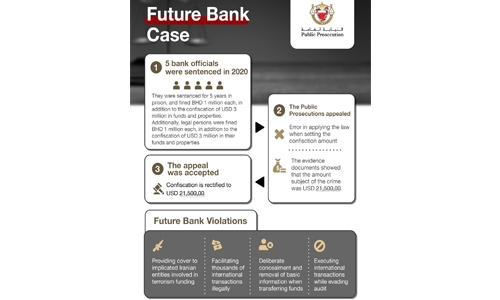 The Financial Crimes and Money Laundering Prosecution announced that the High Criminal Court of Appeals ruled yesterday to rectify the appealed verdict concerning the sentences of confiscation, jail and fines in a money laundering case.

The defendants in the case are Future Bank and five of its officials, as well as several Iranian banks and the Central Bank of Iran.

The court accepted the appeal lodged by the Public Prosecution in relation to the confiscation and amended the confiscation amount imposed against the defendants (natural and legal persons) to $21,500,000 of their funds and properties while upholding the remaining aspects of the appealed verdict.

On October 28, the High Criminal Court sentenced Future Bank officials to five years in prison and to BD1 million fine each and ordered the confiscation of $3 million in funds and property.

The court also fined the legal persons BD1 million each and ordered the confiscation of $3 million in funds and property.

However, the public prosecution appealed the verdict due to an error in applying the law regarding setting the number of confiscations at $3 million.

Evidence documents showed that the amount subject of the crime was $21,500,00, which the verdict should rule for its confiscation or the confiscation of its value in the funds and properties belonging to the defendants.

Following the appeal by the Public Prosecution, the court ruled for the correction of the confiscated amounts.

The Public Prosecution had announced earlier that its investigations have revealed a plot that enabled several Iranian entities, including those involved in terrorism funding, and/or subject to international sanctions, to execute international transactions while evading audit.

Investigations show that the Future Bank, which operated under the Bank Melli Iran and Bank Saderat Iran, facilitated thousands of international transactions while providing cover to the implicated Iranian entities through the deliberate concealment and removal of basic information when transferring funds through the SWIFT network.

Investigations are still ongoing on the rest of the facts, which include a number of Iranian banks, mainly the Central Bank of Iran, exploiting Future Bank in executing international transactions in violation of the Law on Prohibition and Combating Money Laundering and Terrorism Financing, as well as banking laws and regulations.