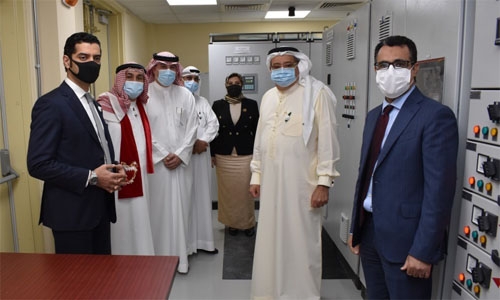 Electricity and Water Authority has announced the completion of a BD 3.5 million Water Distribution Station in Nabih Saleh. Work is currently underway to launch the solar panel system on the upper reservoir, which would power up the entire facility.

A one-million-gallon upper tank, with accompanying pipelines and valves, and a building for electrical devices, control devices and a water chlorination system were constructed, as part of the project. The upper reservoir is covered with aluminium sheets, taking into account the urban character of the region.

It also meets the needs of housing and service projects there. “EWA will continue to implement more development projects to enhance the quality of its services,” the minister said. Nass Contracting Company constructed all of the station’s facilities and supplied it with the latest mechanical, electrical, control and communication equipment from leading companies.