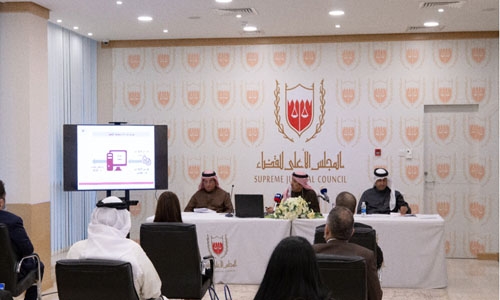 Bahraini courts finished hearing in all cases came before them in 2020, notwithstanding challenges posed by the deadly coronavirus pandemic.

This was announced by Abdulla Al Buainain, the Cassation Court president and Supreme Judicial Council (SJC) deputy chairman, during a press conference. Courts in Bahrain completed hearing in 63,347 cases in the year 2020.

Including 832 pending cases from 2019, completed cases reached 64,179, creating an annual achievement rate of 101%. The average duration of a case in progress was five months, said Al Buainain.

Court resolved 67% of cases in less than three months, and 87% in less than six months. Only 21% of first-degree judgments, which amounted to (49,217), have been appealed. Regarding execution courts, Al Buainain said more than 531,000 new applications were submitted, with them issuing more than 537,000 judicial decisions.

Enforcement courts made 90% of their decision within five working days and 75% within a day.

Counsellor Abdul Rahman Al-Sayed Al-Mualla, Undersecretary of the Court of Cassation and Head of the Judicial Inspection at the Supreme Judicial Council, said it prepared 78 technical inspection reports during 2020 and made seven surprise inspection reports as a result of the complaints received.

The total training hours judges received during 2020 amounted to about 4415 hours in 2020, benefiting 120 judges, Judge Ali Ahmed Al-Kaabi, the Secretary-General of the Supreme Judicial Council, said.

The Secretary-General stressing the Supreme Judicial Council’s keenness to continue training for all judges in light of the Covid-19 pandemic.