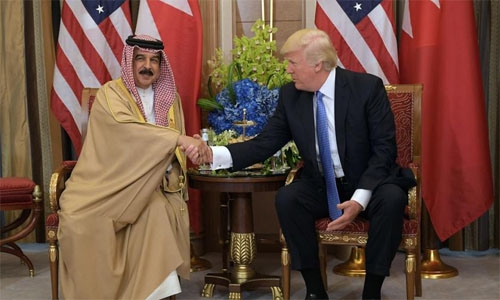 Cables of congratulations yesterday poured in for His Majesty King Hamad bin Isa Al Khalifa on being awarded the Legion of Merit, Degree of Chief Commander, by US President Donald Trump, in recognition of HM’s remarkable efforts in strengthening the Bahrain-US friendship and solid partnership.

Members of the royal family, ministers, lawmakers, diplomats and senior officials, among others expressed pride and appreciation of the high-profile legion which asserts His Majesty’s tireless efforts and contribution to promoting peace and security.

The prestigious Legion of Merit, a rarely-awarded prestigious decoration awarded to distinguished leaders of US allied countries, proves HM the King’s distinguished status and the US great recognition of his role and major contributions to strengthening the pillars of security, stability and prosperity, in accordance with a wise vision to promote peace across the region.

It is also a tribute to HM the King’s major role in broadening cooperation with the US for the interest of the two countries and their friendly peoples.

On the occasion, President Trump expressed pleasure at presenting the Legion of Merit to HM the King, noting that “under King Hamad’s decades of steady leadership as Crown Prince, Amir and King, Bahrain has proved to be an indefatigable ally of the United States.”