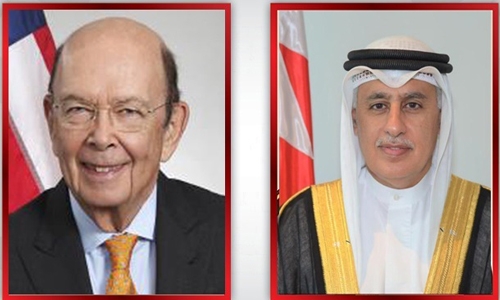 The Ministry of Industry, Commerce and Tourism Ministry today signed a memorandum of understanding, establishing an American trade zone in the Kingdom of Bahrain.

“The availability of economic opportunities in our region is an ideal opportunity for American companies to invest and expand their business by establishing in the Kingdom of Bahrain '', said Alzayani.

He said that the deal would usher in wider horizons for strengthening the joint trade relations in accordance with the advantages of the Free Trade Agreement binding the Kingdom of Bahrain and the United States of America.

US Secretary for Trade Wilbur Ross stressed the importance of Bahrain as a strategic and commercial partner of the United States of America, adding that the platform would maintain the stability and ensure the progress of the American trade in the Gulf region.

“The signing of this memorandum comes to reinforce this common commitment and the close relationship between the two countries”, he added, affirming the commitment of the Department of International Trade at the US Department of Commerce, to work with the Kingdom of Bahrain to achieve the American Trade Zone.

The establishment of the American trade zone in the Kingdom of Bahrain is expected to contribute to enhancing economic, commercial and industrial cooperation and pushing the bilateral trade between the two countries to further horizons.

The USA and Bahrain will promote the American Trade Zone as a regional centre for trade, manufacturing, logistics and distribution among American companies in the Kingdom, the Gulf Cooperation Council (GCC) markets and beyond.

The American Trade Zone in Bahrain will allow US companies to operate in an area equipped for goods exchange activities and comprehensive logistical solutions, in addition to facilitating export operations through Khalifa Bin Salman Port, Bahrain International Airport and King Fahd Causeway or through any other ports to be established in the future in the Kingdom via specialised customs solutions.

The signing of the agreement will further reinforce the long-standing partnership between the United States and the Kingdom of Bahrain, which has a long history of solid economic and security cooperation.

The United States of America established diplomatic relations with the Kingdom in 1971 and designated Bahrain as a major non-NATO ally in 2002.

Moreover, the Free Trade Agreement (FTA) between the USA and  Bahrain, which came into effect in 2006, creates additional trade opportunities for both countries.

The volume of merchandise trade between the two countries reached $ 2.45 million in 2019, with an additional $1.5 billion dollars of trade in services, according to statistics released last year.