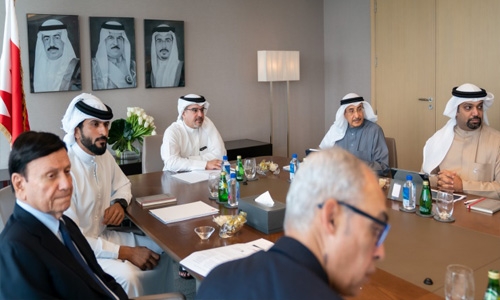 The Economic Development Board (EDB) plays a pivotal role in attracting foreign direct investments through a variety of plans and initiatives organised to showcase investment opportunities within Bahrain.

As the Chairman of the Economic Development Board, His Royal Highness Prince Salman bin Hamad Al Khalifa, the Crown Prince and Prime Minister have initiated a wide range of policy initiatives aimed at broadening the economic base, enhancing business competitiveness and improving education and skills training.

On 3 March 2002, His Royal Highness was appointed Chairman of the Bahrain Economic Development Board (EDB), which is responsible for formulating and overseeing the Kingdom’s economic development strategy and attracting foreign direct investment into Bahrain.

In 2008, under the chairmanship of the Crown Prince, the EDB launched Bahrain’s Economic Vision 2030, a comprehensive strategy for the Kingdom’s economic development which aims to enhance the standard of living of all Bahrain’s citizens.

As Chairman of the EDB, Prince Salman has implemented a clear vision for the development of education, providing future generations with the qualifications and skills needed to face today’s global economy.

In February 2020, while chairing the EDB board meeting held at EDB headquarters, His Royal Highness Prince Salman highlighted the Kingdom’s achievements across all sectors and stressed the importance of implementing various economic strategies in order to further advance sustainable development, in line with the Kingdom’s comprehensive development, led by HM the King.

HRH the Crown Prince emphasised that Bahraini citizens remain an integral part of Team Bahrain’s efforts, and highlighted the Kingdom’s commitment to providing quality opportunities for citizens in tandem with the growth of the national economy.

HRH the Crown Prince went on to note that the Kingdom’s economic competitiveness is centred around wide-ranging sustainable diversification efforts designed to enhance its business environment and create further investment opportunities.

Also in February 2020, His Royal Highness Prince Salman attended a business reception in Rome, organised by the Bahrain Economic Development Board (EDB) in cooperation with large Italian enterprises, on the sidelines of an official visit to the Italian Republic.

During the reception, HRH the Crown Prince underlined the importance of further strengthening the Kingdom’s economic competitiveness through the adoption of initiatives aimed at enhancing sustainable diversification efforts, in line with Bahrain’s Economic Vision 2030.

HRH the Crown Prince noted that promoting the capacity for innovation is key to providing favourable conditions for investment opportunities and economic growths, which are the foundations of the Kingdom’s comprehensive development goals, led by HM the King.

Great Expectations in Private Sector According to Chairman of the Bahrain Chamber of Commerce and Industry (BCCI), Sameer Abdulla Nass, the HRH the Crown Prince’s appointment as Prime Minister affirms the importance of developing the performance of government agencies and improving their outputs, which will lead to upgrading national action and supporting government decisions.

He affirmed that the royal move will boost national action and empower Bahrain to continue building its civil, legal and democratic systems in a way that ensures greater expertise in the administrative, economic and development fields. He pointed out that the government, under the leadership of the late His Royal Highness Prince Khalifa bin Salman Al Khalifa, had made major strides in the fields of development and modernisation and those achievements will be doubled under the leadership of HRH the Crown Prince thanks to his forward-looking vision.

Nass said he is looking forward to stimulating the economic growth and developing partnership, especially given the fact that BCCI considers HRH the Crown Prince and Prime Minister as the best supporter and a leader of the partnership with the private sector.

This is reflected in HRH the Crown Prince’s qualitative projects and initiatives that serve as the compass for Bahrain’s economic policies, and aim to enhance the private sector’s competitiveness and productivity, in accordance with a national programme based on HM the King’s directives, the Government Action Plan and the Economic Vision for Bahrain 2030, he said.

The BCCI Chairman highlighted the great role played by HRH the Crown Prince and Prime Minister in promoting the Kingdom’s status as a country that attracts investments, embraces excellence and stimulates pioneering projects.

A fillip to Bahrain-Saudi ties