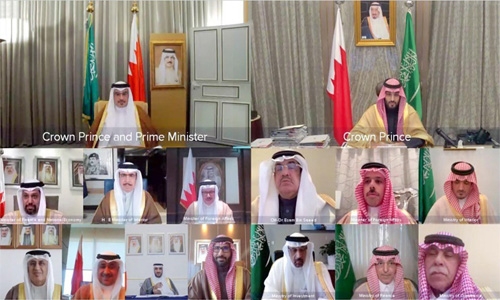 A fillip to Bahrain-Saudi ties

The Bahrain-Saudi joint action, the Crown Prince and Prime Minister said, will sustain the growth of the economy based on the principles of “competitiveness, justice and openness.” “This would create an environment that rewards creativity and innovation and generates promising opportunities,” said HRH Prince Salman.

In his virtual address, Prince Salman affirmed keenness to move forward with the same cohesion displayed by the ancestors, but with a renewed determination to gain from the successes of the past and the promising future based on solid bonds and common destiny.

Bahrain and Saudi shares relations that are firmly based on strong historical foundations of brotherhood, visions and mutual understanding and coordination, HRH Prince Salman told the meeting.

The Crown Prince and Prime Minister praised the decision of the Custodian of the Two Holy Mosques King Salman bin Abdulaziz and His Majesty King Hamad bin Isa Al Khalifa to raise the level of representation of the Saudi-Bahraini Coordination Council.

Prince Salman also hailed the efforts of the Saudi Crown Prince to enhance bilateral cooperation and integration in all fields. The meeting approved organisation procedures of the council’s work and the formation of the council’s sub-committees.