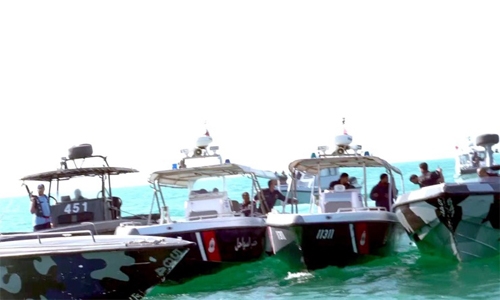 The Ministry of Interior has reiterated its categorical rejection of any insults to its staff or threats to their safety and stressed that it will take the steps it deems appropriate to protect Bahrain's security and stability.

The Ministry affirmed its stance in a statement that clarified the incident that occurred last week when Qatari patrols intercepted two Bahraini vessels on their way home from a maritime exercise in violation of the Law of the Sea and international conventions.

Based on the importance of informing the public about developments of events and supplementing the statement issued by the Ministry of Interior on 25 November 2020 regarding the interception by three Qatari Coast and Border Security patrols of two Bahraini Coast Guard vessels on their way back following the end of their mission in "Al Manaa" maritime exercise, a number of facts need to be clarified.

The incident targeting the two Bahraini vessels by the Qatari patrols started with the response of the two vessels, then their interception.

The Qataris detained the vessels, threatened to use weapons and prevented the Bahraini crews from contacting the operations room, without regard to their affiliation to the Bahraini Coast Guard as an official entity.

The Qatari boats did not carry any flag or identification as required by international norms, while the two Bahraini vessels carried the flag of the Kingdom of Bahrain and the logo of the Ministry of Interior.

The Ministry of Interior commends the level of discipline, professionalism, and self-restraint of the two Bahraini vessel captains during the incident in dealing with the hostile actions of the Qataris.

The actions taken by the Qatari patrols are in blatant violation of the conventions and treaties related to the international Law of the Sea.

The Ministry of Interior expresses its condemnation of the Qatari practices that it is used to carrying out towards Bahraini boats and fishing vessels in this region.

Between 2010 and 2020, about 650 boats and 2,153 people were arrested, which is contrary to the situation that existed more than 200 years ago during the times of pearl diving and fishing.

Qatar has persisted in detaining Bahraini fishing boats for long periods and prosecuting those on board, which resulted in a negative impact on the livelihoods of citizens and in prejudice to the fishing profession that they inherited from their forefathers. Such provocative practices have deprived them of their livelihood and source of income.

The Ministry of Interior reiterates its categorical rejection of the insults and threats to its members and their safety, and stresses that the Qatari side bears legal responsibility for all violations against the Kingdom of Bahrain.

The Ministry will take the steps it deems appropriate to protect the security and stability of the homeland.