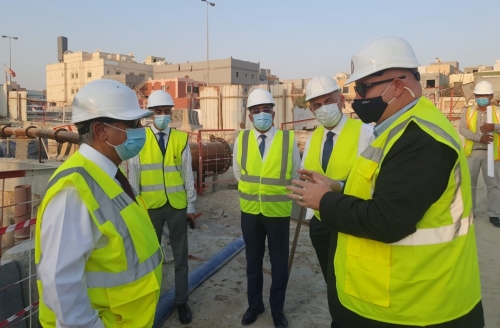 The construction works of a Sewage transmission line linking Ramli housing project and the Buri and Aali regions are going on as planned, Works Minister said. Essam Khalaf, the Minister of Works, Municipalities Affairs and Urban Planning, said these works are part of the first stage development of $6 million Shaikh Zayed Highway Development Project which began in August last year.

The sewage network project upon completion will give a qualitative upgrade to the sanitation services and ensure a healthy environment for the citizens in line with the Government work programme and Economic Vision 2030.

The current first phase of the project planned in four stages includes the construction of a main 1.6km transmission line from Ramli Housing Project to Sheikh Isa bin Salman Street, and the construction of a sewage lifting station. It will have a depth of 13 meters and a pumping capacity of 950 litres/sec.

The Ministry has also constructed a sewage line from Ramli housing project to the existing sewage network in Salmabad, temporarily until the current project reaches completion. The minister said this as he visited the project site accompanied by Assistant Undersecretary for Sanitation, Ibrahim Hassan Al-Hawaj, and the Director of the Sanitation Planning and Projects Department, Fathi Abdullah Al-Farea, several engineers, and the project contractors.

45pc completion Essam Khalaf said the Shaikh Zayed Highway Development Project, which also includes the sanitation project, has achieved a 45 per cent completion. “It is one of the important strategic road network development projects in the Kingdom connecting the villages of Aali, Salmabad and Madinat Zayed towards Sheikh Khalifa bin Salman Street to Manama and vice versa,” the minister said.

The project aims at providing easy access to the Isa Town, and ease traffic jams in front of the Bahrain National Stadium. The project will expand the Sheikh Zayed Road into three lanes in each direction from December 16 Highway to Shaikh Khalifa bin Salman Highway and from the western roundabout of A’ali to Shaikh Isa bin Salman Highway.

Four roundabouts along the Shaikh Zayed Highway will be converted into intersections with traffic lights with the project also including lighting work, roadblocks, traffic signs, revamping the asphalt layers, beautification and landscaping as well as rainwater drainage, the minister said.

To reduce congestion Upon completion, the highway will have a capacity to accommodate 53,000 vehicles per day in two directions and will help reduce traffic congestion in the A’ali and Salmabad areas. It is worth noting that the project was awarded to the Western Baynunah Group Company by the Tender Board, where work began in August 2019 and is expecting completion in mid-2021.

The total value of the project is 23,400,000 BD (twenty-three million and four hundred thousand BD) and funded by a fund Abu Dhabi Development. Yet another part of the mainline is also being completed. That project includes the extension of 1.8 km of pipelines, which costs 1,518,825 dinars. Work began last March will end in the first quarter of 2021.