Two arrested for dealing shabu worth BD120,000 | THE DAILY TRIBUNE | KINGDOM OF BAHRAIN 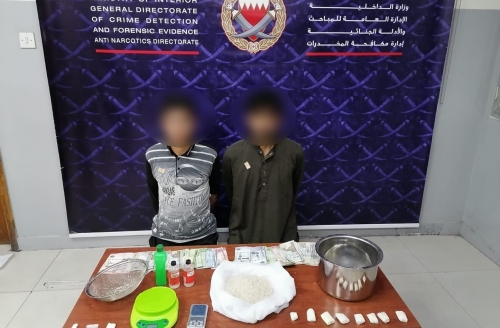 Anti-drug police have arrested two Asians for promoting the narcotic substance shabu, with its value estimated at about BD120,000, the Ministry of Interior reported. The ministry said that the General Directorate of Crime Detection and Forensic Evidence director-general announced the detention of the individuals, who are aged 20 and 28 years old.

The director-general explained that, within the framework of the Anti-Narcotics Directorate police’s role in implementing the law and combatting the abuse of drugs and their promoters, the two Asians were identified and were arrested while committing the crime.In addition, the money collected from the illegal sale of the drugs was confiscated. The director-general indicated that legal measures have been taken and the case has been referred to the Public Prosecution.