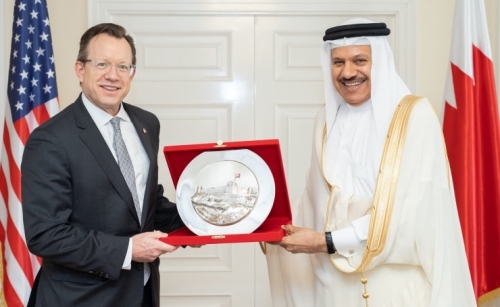 The Minister of Foreign Affairs, Dr Abdullatif bin Rashid Al Zayani, yesterday held a farewell ceremony at the Ministry’s General Court for the outgoing US Ambassador to the Kingdom of Bahrain, Justin Hicks Siberell. The Foreign Minister presented the Ambassador with a commemorative gift marking the occasion, wishing him further success.

Dr Al Zayani lauded the strong relations and ongoing strategic partnerships between the two countries, which is witnessing development and growth at all levels. He highlighted the Ambassador’s efforts in promoting Bahraini-American relations between the two friendly countries.

Siberell extended his thanks and appreciation to the Foreign Minister and all officials in the Kingdom for helping him carry out his duties. The ceremony ended with the Ambassador wishing further development, prosperity and growth in bilateral relations to Bahrain.

Bahrain’s hospitality and protection thanked Dr Al Zayani received a special letter of thanks yesterday from the Danish Minister of Foreign Affairs, Jeppe Kofod. Kofod expressed his thanks and appreciation to Bahrain for the care and hospitality it offered to Danish citizens who were on the Bruxelles tanker, getting them to safety and ensuring their safe return home in light of the coronavirus (COVID-19) outbreak.

He also hailed the course of the friendly relations between Bahrain and Denmark in all areas based on fondness and appreciation, wishing the Kingdom further development. Phone call from OIC SecretaryGeneral The Foreign Affairs Minister received another phone call yesterday from the Organisation of Islamic Cooperation (OIC) secretary-general, Dr Yousef Al-Othaimeen.

Dr Al-Othaimeen lauded the great efforts exerted by the Kingdom of Bahrain in combating the coronavirus (COVID-19) pandemic and maintaining the safety of citizens and residents, wishing the Kingdom of Bahrain further development. Dr Al Zayani in turn, lauded OIC’s prominent work towards the cooperation and joint coordination among member states. A number of topics and issues of common concern were also discussed during the call.