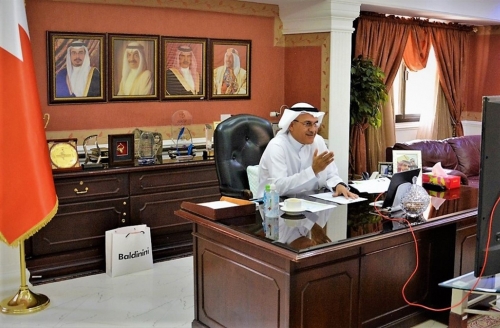 Northern Governor Ali bin Al Shaikh Al Asfour chaired a remote meeting in which projects related to the governorate were discussed. In attendance were Deputy Governor Brig Khalid bin Rabia Sinan Al Dossary, members of the Council of Representatives, personnel from government agencies, and a number of governorate officials.

He praised the constructive cooperation between the governorate and government agencies in implementing the directives of the Interior Minister, which includes setting up a mechanism to reduce the density of expatriate labourers in their accommodations.

He briefed the council on these measures and discussed ways to support the ongoing efforts, such as providing information related to real estate owners before taking administrative and legal measures that guarantee social distancing in overcrowded housing. The council also discussed steps taken by the governorate in preparation for its accreditation in the World Health Organisation’s Healthy Cities programme.

The infrastructure was reviewed in A’ali and the Ramli village project, especially with regard to sanitation, where it was noted that the percentage of sewage connection in A’ali exceeds 85 per cent.

The Northern Governor pointed to the projects that are being pursued in A’ali, through communicating with the people, forming committees in partnership with civil society, and analysing the health and social situation, in addition to continuous evaluation of ways to preserve the pottery industry and develop furnaces for burning pottery work.

An initiative was also discussed to provide sterilisation equipment to families in A’ali, within the promotion of precautionary and preventive measures and spreading health awareness. The issue of infrastructure availability was also reviewed for the Salmabad industrial area.