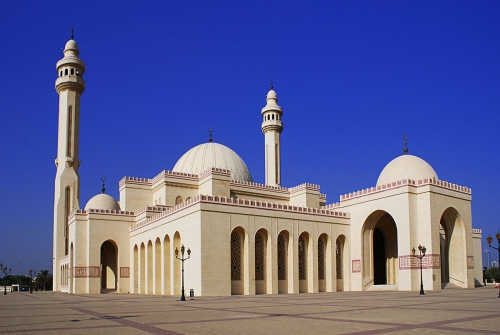 Necessary procedures are to be taken to preserve historical and heritage mosques such as the Ahmed Al Fateh Mosque and the Ahmed Al Fateh Grave in Manama. This was directed yesterday by His Royal Highness the Prime Minister Prince Khalifa bin Salman Al Khalifa as he chaired the regular weekly Cabinet session yesterday, attended by His Royal Highness Prince Salman bin Hamad Al Khalifa, Crown Prince, Deputy Supreme Commander and First Deputy Premier.

HRH the Prime Minister requested the Ministry of Justice, Islamic Affairs and Endowments to cooperate with the Bahrain Authority for Culture and Antiquities (BACA) on the preservation work. Final anti-dumping duties to be imposed on certain products The Cabinet also agreed yesterday to impose final anti-dumping duties on Bahraini imports of tiles and ceramic products from China and India, in compliance with the resolution of the Industrial Cooperation Committee of the GCC states.

The session instructed the Ministry of Finance and National Economy and Customs Affairs to take the necessary measures, as highlighted in the memorandum submitted for this purpose by the Finance Minister and the Industry, Commerce and Tourism Minister.

Athletes’ bonus scale approved The Cabinet approved the bonus and allowance scale for athletes, in appreciation of their achievements for the Kingdom at regional and international sports gatherings. The scale determines the value of bonuses to be granted to the athletes of national clubs that clinch one of the first three places at GCC, Arab, Asian or international individual or collective sports competitions.

Students congratulated HRH the Premier extended congratulations to graduates from the General Certificate of Secondary Education for their success and distinction, despite the exceptional circumstances and challenges resulting from the outbreak of the coronavirus (COVID-19), calling on them to continue their success path.

HRH the Prime Minister extended thanks to parents, and the Education Ministry’s affiliates for their dedication and perseverance to finish the academic year. Also during yesterday’s session, HRH the Prime Minister lauded the Kingdom’s achievements in the field of housing, and extended thanks to service ministers for their field visits to villages and towns to collect first-hand information about local citizens’ needs, citing the Housing Minister’s recent visit to the Al Salhiya village.

HRH the Premier also directed the Ministry of Works, Municipalities Affairs and Urban Planning to reschedule the financial dues with the Ministry on some of the butchers in the Manama Central Market and the Jidhafs Market.

The Cabinet condemned the Houthi militias’ terrorist attacks against civilians and civilian targets in Saudi Arabia using ballistic missiles and drones, and commended the success of the Saudi Air Defence Forces and their efficiency in dealing with these attacks.

The session condemned the Iranian and Turkish military intervention in northern Iraq, noting that it violates the sovereignty of a sisterly Arab country, constitutes interference in Iraq’s internal affairs and poses a threat to regional security and stability.