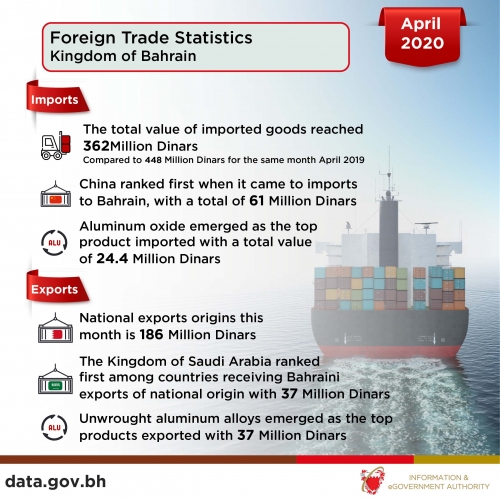 Bahrain had exported BD186million worth of products of national origin last month. This is according to the foreign trade report of April 2020, issued yesterday by the Information and eGovernment Authority (iGA), encompassing data on the balance of trade, imports, exports (national origin), and re-exports.

The Kingdom of Saudi Arabia was first among countries receiving Bahraini exports of national origin, importing BD37million worth of products. Meanwhile, the UAE ranked second with BD20million, and Egypt third with BD18million. Unwrought aluminum alloys emerged as the top products exported during April with BD37million.

Unwrought aluminum (not alloyed) was second with a value of BD31million, and agglomerated iron ores and concentrates was third with BD22million. Meanwhile, the value of imports decreased by 19 per cent, reaching BD362million in April compared to BD448million for the same month the previous year.

The top 10 countries accounted for 68 per cent of the value of imports, with the remaining countries accounting for 32 per cent. According to the report, China ranked first when it came to importing products to Bahrain, with a total of BD61million. Saudi was second with BD30million, while Brazil was third with BD28million.

Aluminum oxide emerged as the top product imported into Bahrain with a total value of BD24.4million, while non-agglomerated iron ores and concentrates was second with BD24million. Four-wheel-drive cars were third with BD16million.

The trade balance—the difference between exports and imports—recorded a deficit totaling BD139 million during April of this year compared to BD178million for the same month last year, an improvement of the trade balance by 22 per cent.