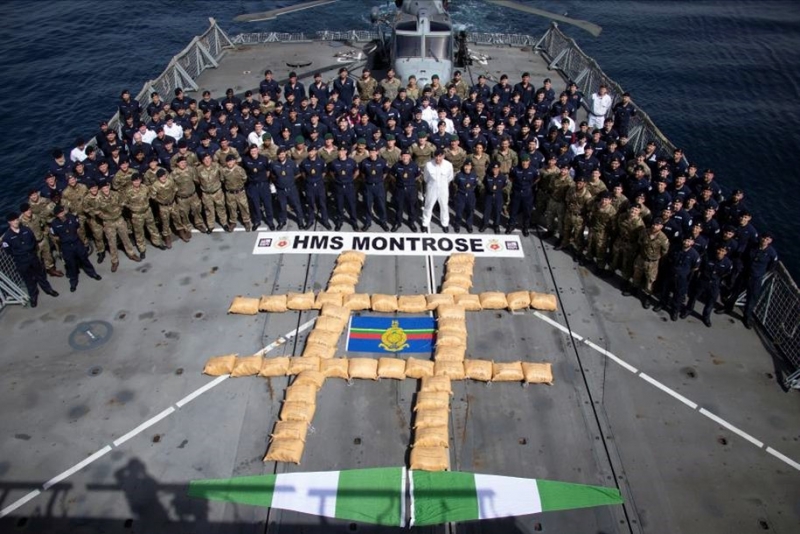 Starting on Valentine’s Day, ships working in direct support of Combined Task Force 150 (CTF 150) had a busy weekend, the result of which was a major drug bust by Her Majesty’s Ship (HMS) MONTROSE, a United Kingdom Royal Navy (RN) frigate. In the late afternoon of 15 February, MONTROSE’s ‘WILDCAT’ shipborne helicopter spotted a suspicious dhow in an area of the Gulf of Oman known to be popular with drug smugglers. As the sun rose over the Arabian Sea on the morning of 16 February, several packages could be seen floating in the water near the dhow. The packages were recovered and determined to be hashish. Royal Marine Commandos then boarded the dhow, securing it for search by a Royal Navy boarding team.

The master of the dhow admitted that the packages in the water came from his vessel, and after a thorough search of the dhow, the team found another cache of hashish. Add that to the drugs recovered from the water, and MONTROSE’s total seizure of hashish was 1045kg worth an estimated regional wholesale value of $538,860 US dollars.

This is the first seizure for HMS MONTROSE while working in direct support of the Australian lead CTF 150. The Royal Australian Navy, with support staff from the Royal Canadian, and Royal New Zealand navies assumed command of CTF 150 in early December 2019. “Fantastic work by the crew of HMS MONTROSE in tracking this smuggler, stopping them from ditching their cargo, and keeping these drugs from reaching their destination,” said Commodore Ray Leggatt, Royal Australian Navy, Commander of CTF 150. “With the support of ships like COURBET and MONTROSE, CTF 150 continues to apply pressure and disrupt the operations of terrorist and criminal organisations in the region that seek to use the maritime domain for their illegitimate trade.”

Denying the use of the maritime domain to illegitimate traffic in the region is CTF 150’s mission. The co-operation and support of CMF participating nations like France and the United Kingdom are the key mission enablers that CTF 150 relies on to carry out the mission. The 33 nations of CMF, working together, improves maritime security, helps strengthen regional nations’ maritime capabilities, and upholds international norms and today’s bust is just the latest example of that co-operation in action