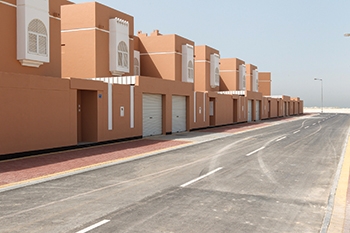 The Ministry of Housing informed the delegation about its experience in building new towns in Bahrain to implement His Majesty King Hamad bin Isa Al Khalifa’s order to build 40,000 housing units, as well as the government’s social housing plans stemming from the royal order. The US delegation was also informed about the facilities of the East Hidd Town, which is an example of the modern towns being constructed by the Ministry of Housing. During the visit, the delegation was updated about the Kingdom’s experience in providing housing services to low-income citizens, including the establishment of three towns, namely Isa Town, Hamad Town and Zayed Town, in 1960s, 1970s and 1980s, in addition to the establishment of the Housing Ministry, the Eskan Bank, the new towns and the partnership initiatives with the private sector.

The Ministry of Housing stressed the government’s keenness to strengthen its relations with international and regional organisations to benefit from their expertise in various fields. It also highlighted the efforts of the government, through its action plan, to achieve Sustainable Development Goals (SDGs), especially SDG 11 aimed at making cities and human settlements inclusive, safe, resilient and sustainable. The ministry said that its efforts are currently focused on building five new towns at the same time, chosen according to the density of housing demands, in addition to implementing other residential projects to ensure that the housing services cover the Kingdom’s governorates and regions.

The visit featured a presentation about the Housing Ministry’s new towns projects, as well as its strategy to provide housing units for the citizens through partnership initiatives with the private sector. It also featured a documentary on the government’s efforts to provide housing services to the citizens. Members of the delegation expressed their admiration for the kingdom’s experience in delivering affordable social housing services to the citizens, as well as for the Housing Ministry’s plans to provide social housing for low-income citizens.