No threat of coronavirus in the Kingdom, says Health Ministry | THE DAILY TRIBUNE | KINGDOM OF BAHRAIN 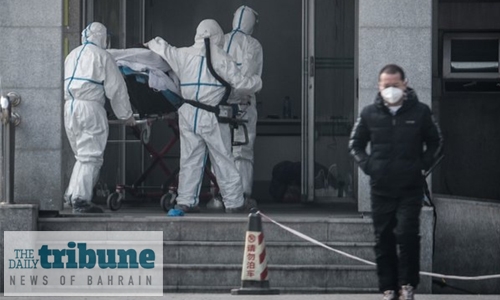 No threat of coronavirus in the Kingdom, says Health Ministry

The Kingdom doesn’t have any case of coronavirus and is taking all measures to protect the people here by tackling the threat, according to Health Ministry officials. The Health Ministry said in a statement issued that a number of measures has been taken following an outbreak of the deadly coronavirus in China.

“The ministry is taking all precautionary measures for this purpose. The situation is being monitored closely. Co-ordination is ongoing with relevant authorities and at the Bahrain International Airport.” The ministry has urged the public to take precautionary measures after travelling to places affected. It said that it is communicating directly with the World Health Organisation.

A never-before-seen virus, detected in the Chinese city of Wuhan, has claimed 17 lives and infected hundreds of Chinese citizens with a pneumonia-like illness, according to China’s National Health Commission. The virus was first reported to the World Health Organisation on Dec 31 and has been under investigation since then. Chinese scientists have linked the disease to a family of viruses known as coronaviruses, the same family as the deadly SARS and MERS viruses.

Scientists have yet to fully understand how destructive the new virus, known as 2019-nCoV, might be. Researchers and investigators are just beginning to understand where it originated, how it’s transmitted, how far it has spread and what its symptoms look like. As of Jan. 22, case numbers have skyrocketed to over 440 in China and abroad. Chinese authorities also confirmed health workers have been infected with the virus, suggesting that it has achieved human-to-human transmission.

As a result, authorities are taking steps to guard against its spread. On Jan 22, the WHO will convene an emergency committee to explore whether the virus constitutes a public health emergency.  Researchers believe the number of cases may be higher than current reports suggest, and at least three US airports have begun screening incoming passengers for signs of illness, as have busy airports in Hong Kong, Singapore, South Korea and Malaysia.

Coronaviruses belong to a family of viruses known as Coronaviridae and look like spiked rings under an electron microscope. They are so named because of these spikes, which form a halo around their viral envelope. Coronaviruses contain a strand of RNA within their envelope and cannot reproduce without getting inside living cells and hijacking the machinery found within. The spikes on their viral envelope help them bind to cells, which gives them a way in.

Typically, these types of viruses are found in animals ranging from livestock to household pets and wildlife such as bats. When they make the jump to humans, they can cause fever, respiratory illness and inflammation in the lungs. In immunocompromised individuals, such as the elderly or those with HIV-AIDS, such viruses can cause severe respiratory illness.

Extremely pathogenic coronaviruses were behind SARS (severe acute respiratory syndrome) and MERS (Middle East respiratory syndrome) and were easily transmitted from human to human. SARS, which showed up in the early 2000s, infected more than 8,000 people and resulted in nearly 800 deaths. MERS, which appeared in the early 2010s, infected almost 2,500 people and led to more than 850 deaths.