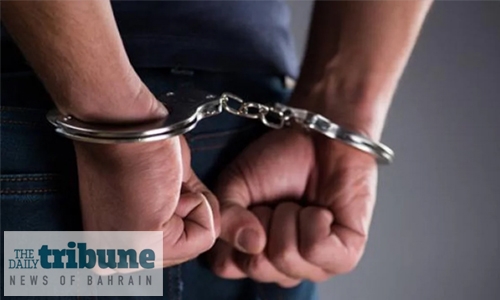 The Public Prosecution yesterday announced the arrest of a drug ring in Muharraq Governorate involving a doctor, pharmacists and military personnel.

According to Muharraq Governorate Chief Prosecutor Ahmed Abdullah Al Ramadhan, the gang is headed by a doctor who misused his authority to issue fake prescriptions so that his accomplices would have access to prescription pills and sell it in the black market to addicts.

Mr Al Ramadan explained that the ring was busted when the Military Police of Bahrain Defence Force (BDF) informed the Anti-Narcotics Department in Interior Ministry that it arrested a military staff and two civilians while selling narcotics. Large quantities of narcotics and amounts of money collected from selling them were found in the arrestees’ possession.

The Chief Prosecutor said the prosecution launched its investigation into the incident, interrogated the arrestees, heard witnesses’ testimonies and reviewed a report prepared by the technical committee, which inspected the computers in a number of public and private hospitals, and analysed the entered data in them.

Explaining further in a press statement that was circulated yesterday, Mr Al Ramadhan said it was proven that the doctor issued fake prescriptions and reports stating that the individuals mentioned in them had undergone the necessary medical examination. He was able to do this after his companions provided him with copies of identity cards so he could prepare the reports and write the prescriptions.

The other suspects would buy the narcotics from certain pharmacies, where the pharmacists are also involved in their plot, and later sell the pills to drug addicts for higher prices.

Mr Al Ramadhan confirmed that the Public Prosecution yesterday ordered to detain the suspects pending further investigation, while it referred the military staff member to the Military Judiciary and issued an arrest warrant against other suspects who’re abroad, in order to refer the case to the concerned criminal court.