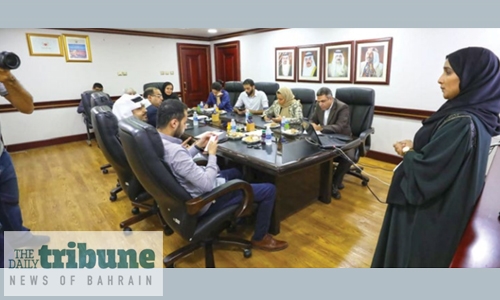 The number of cases pending before courts in the Kingdom has dropped by 56 per cent last year, according to judicial indicators. In the beginning of 2019, there were over 26,000 pending cases before courts, which has now come down to 15,000.

“These statistics speak volume of achievements in terms of disposal of cases quickly and in record time,” said Abdullah bin Hassan Al Buainain, President of the Court of Cassation and Vice-President of the Adviser to Supreme Judicial Council, on the sidelines of the Press conference held at the Council’s premises.

“The automation of systems and restricting the maximum case duration to six months have helped in achieving the targets set by the courts. The average age of cases has seen significant progress in courts of all levels. “The average age of a case stood at six months, while 60 per cent of the total cases were settled in less than three months.”

The General Statistics for the Performance of Courts in 2019 revealed that civil, criminal, and Shari’a courts of all levels considered 101,167 cases, while the number of settled cases reached a total of 85,717 cases. The number of appealed judgments reached 14,655, which is 25 per cent of the total judgments issued for the first degree.

“The statistical figures also showed that the current applications at the beginning of the current year amount to 4,686, which marks a significant decrease in the number of applications in progress from the previous year by 80pc and an increase in the completion rate in the enforcement courts,” he said.

“The Supreme Judicial Council will continue, in co-operation with the Ministry of Justice, Islamic Affairs and Endowments, to develop new initiatives aimed at ensuring the continued development of the court performance and the supporting entities through expansion of electronic services, and the use of the private sector.

“We are meeting with all stakeholders in the judicial process with the aim of developing new initiatives that continues to develop the judicial system in a way that is responsive to the needs of users and society, which includes lawyers, the business sector, real estate and bankers,” he added.

Judge Abdul Rahman Al Sayed Al Mulla and Chief of Judicial Inspection told the Press conference the judicial inspection, in co-ordination and co-operation with the supervising judges, works continuously to enhance the quality of judgements, through constant monitoring and inspection as well as ensuring the attendance of the judges to specialised training programmes. “In the year 2019, the number of reports prepared by the Judicial Inspection Department reached 101 in various court departments.

In 2019, supervising judges dealt with 537 complaints received by litigants and lawyers. Around 48 training programmes were implemented in the last year through the Institute of Judicial and Legal Studies, with a total of 3,600 training hours, in which various judges of all civil, criminal and Shari’a courts participated,” Mr Al Mualla said.

Judge Ali Ahmed Al Kaabi, Secretary-General of the Supreme Judicial Council, said that in continuing to develop the judicial system, many laws were passed, most notably the alternative to imprisonment law aimed at promoting the application of alternative penalties to imprisonment within the society, rehabilitating the person who committed the crime and creating an effective member of society by assigning him to one of the community services, instead of imprisoning him.

“There was also amendment to some provisions of the Civil and Commercial Procedures Code, which stipulated a fundamental and important change. The judgment in civil cases will be final if the value of the claim does not exceed BD1,000.”

“The issuance of the law of reorganisation and bankruptcy established a new system that aims to reorganise debts and avoid liquidation of the assets of the debtor whenever possible, and to allow the possibility of continuing to operate while adjusting certain practices and thus preserving the interests of all creditors,” he pointed out.

“This included the issuance of a decree on mediation for settlement of disputes, which adopted the mediation system in civil, criminal, and Shari’a cases prior to and during court proceedings, thereby enhancing the application of alternative means of dispute resolution.

“A decision was also issued to specify the types of small claims that are managed by electronic means, which includes all of the telecommunications companies ’claims, the Social Insurance Authority, the Electricity and Water Authority and the Labour Market Regulatory Authority, health care fees, credit cards, and bank loans,” the judge said.