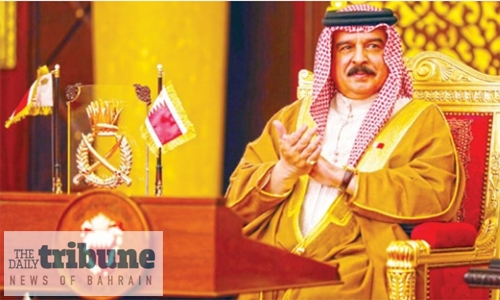 Addressing the audience, HM the King praised the role of Bahrain’s diplomacy in boosting the kingdom’s relations with other countries and promoting foreign policy on the basis of mutual trust, good neighbourliness and respect of common interests to foster global stability and peace.

The King stressed that the Kingdom’s foreign policy has set a “special model” by relying on principles and values stemming from the human culture and the Bahraini personality that is known for its civilised communication with the world with its varied cultures and civilisations. HM the King lauded success of Bahrain’s balanced diplomacy and flexible and decisive policies which helped confront challenges and solve many crises to assert full commitment and unwavering respect to international laws and conventions.

His Majesty hailed the tireless efforts of the Bahraini diplomatic competencies to maintain the Kingdom’s active and interactive role in dealing with Arab and Islamic issues, strengthening its international relations and preserving Bahrain’s status as a civilisational beacon of peace, rapprochement and tolerance. The Foreign Minister extended heartfelt thanks and gratitude for the meeting to mark the golden jubilee of institutional diplomatic work in Bahrain.

He took pride in the Diplomatic Day allocated by HM the King to celebrate the diplomatic community in recognition of its remarkable national role in carrying out the royal directives to protect national achievements and interests. He commended the unwavering royal support to Bahrain’s diplomacy which enabled the Kingdom’s foreign policy to adopt a unique model based on balance and moderation.

He also lauded the royal reform approach which turned Bahrain into a modern and prosperous country advocating peace and coexistence. The Foreign Minister underlined the kingdom’s well-defined and active foreign policy to boost relations with brotherly countries and allies and work out solutions to may crises. He underscored the principles of mutual respect, dialogue, constructive coexistence and fruitful openness on which Bahrain’s foreign policy have always been based.

He also expressed thanks and respect to HM the King for the trust given to him over the past fifteen years as a Foreign Minister. He also extended thanks and respect to His Royal Highness Prime Minister Prince Khalifa bin Salman Al Khalifa and His Royal Highness Prince Salman bin Hamad Al Khalifa, Crown Prince, Deputy Supreme Commander and First Deputy Premier for their tremendous support and valuable directives.

He pointed out the inspirational role of Deputy Premier Shaikh Mohammed bin Mubarak Al Khalifa, the pioneer of Bahrain’s diplomacy. The Foreign Minister congratulated Dr Abdullatif Al Zayani on being chosen to continue spearheading Bahrain’s diplomacy to safeguard the Kingdom’s interests and sovereignty. The Foreign Minister presented HM the King with a commemorative gift on the occasion.