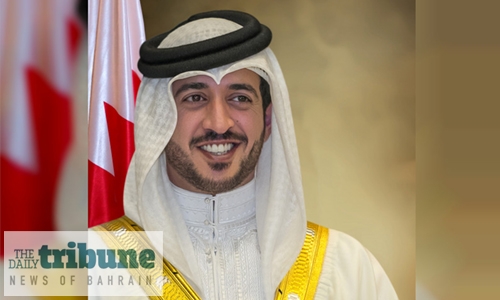 His Highness Shaikh Khalid bin Hamad Al Khalifa, First Deputy President of the Supreme Council for Youth and Sports, and President of Bahrain Olympic Committee, has recently approved the awards of the GCC Strongest Man “Heavyweight” Championship, which is scheduled to be held next April at Bahrain International Circuit.

The championship was the focus of attention of the media and enthusiasts of strength and endurance sports. This success came after we adopted the integration of traditional games in the championship, with the aim of continuing efforts to preserve the heritage of the Kingdom of Bahrain and the countries of the region.”

His Highness called upon the youth in the GCC region to register and participate in the championship. At the same time HH Shaikh Khalid said he is looking forward for achieving the goals the championship was launched for and are set by His Highness, such as harnessing sport in support of relationships and strengthening the bonds of love, brotherhood and cooperation between the people of the GCC States.

For its part, the organising committee of the championship, represented by the Media Office of HH Shaikh Khalid bin Hamad Al Khalifa, announced that it will pay visits to the brotherly GCC  countries, including the UAE, Saudi Arabia, Kuwait and Oman, to meet the youth who are interested in taking part in the championship.