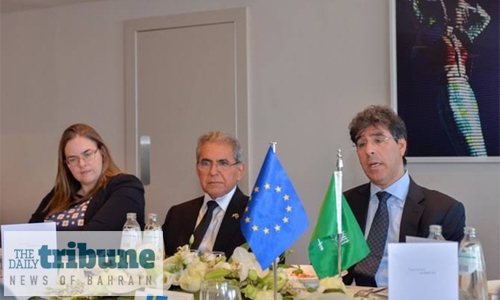 Awwad Al Awwad, president of the Saudi Human Rights Commission (HRC), told EU members that the Kingdom has been an international leader in human rights obligations. He met with 17 members of the EU’s Political and Security Committee in the presence of the head of the Saudi mission to the EU, Ambassador Saad bin Mohammed Al Arifi on Thursday in Brussels.

“The Kingdom sought to protect and promote human rights and fulfilled its international obligations by submitting all its international reports. This made it one of the 36 countries to do so out of 197 state parties. This was due to the support provided by King Salman to human rights,” Al Awwad said.

“Crown Prince Mohammed bin Salman has made a qualitative leap and has led a reform, development, change and modernisation movement in all of the state’s facilities and human rights in particular. The three past years have seen the taking of around 60 human rights-related decisions, with 22 of those aimed at empowering women.

“The Kingdom’s Vision 2030 is at the forefront of these reforms intended to focus on humans, the central element of development,” he added, noting that “the vision included objectives related to human rights.” The HRC president said that Saudi Arabia “is open to the world and still looks forward to achieve more under its wise leadership.

It seeks to achieve the principles and values of human rights and hopes they will become universal, which would promote the achievement of sustainable development and the protection and promotion of human rights.” Al Awwad stressed the Kingdom’s interest in fighting terrorism.