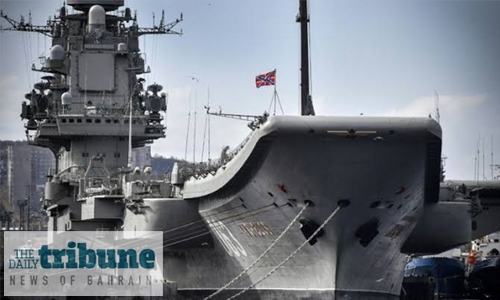 Emergency workers and sailors have extinguished a blaze on the Russian navy’s only aircraft carrier that has killed two people, the navy said yesterday. The fire on board the flagship Admiral Kuznetsov started on Thursday. One serviceman was found dead Thursday evening and the body of an officer was discovered Friday, Russia’s Northern Fleet said in a statement to Russian agencies.

The second body was discovered in the location of welding works that are believed to have caused the accident. The navy said search operations were complete and the fire was out. Officials have not specified the extent of damage on the vessel, which has suffered a string of accidents in recent years, amid rumours it might be beyond repair.

The Zvezdochka shipyard in Murmansk, where the carrier was undergoing a refit when the accident occurred, told TASS agency that a special navy commission would determine damages and responsibility. Ten people were hospitalised Thursday due to smoke inhalation, officials said.

The fire broke out during work that was begun in April 2018 by Russia’s United Shipbuilding Corporation. In October 2018 the ship suffered another accident when a crane collapsed onto its deck, killing one worker. Russian daily Kommersant reported that the fire began when hot metal fell down a shaft onto garbage on a lower deck that included a piece of oily cloth.

The ship’s fire suppression system had been dismantled during the refit, which was why the fire was able to spread, the newspaper said, without quoting its sources. A probe was launched Thursday into possible construction safety violations. Kommersant said that damage was mostly confined to cables that were scheduled to be replaced anyway.

The refit, reported to cost about $1 billion, was scheduled following the carrier’s deployment as head of a naval strike group off the Syrian coast. The Admiral Kuznetsov was to be the first of a new fleet of Soviet aircraft carriers, but the Russian navy has been hit by a huge drop in funding since the 1991 collapse of the Soviet Union.