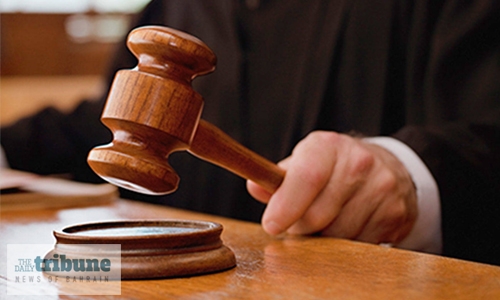 Two foreign women, who are accused of practising prostitution in the Kingdom and sharing naked pictures of themselves online to promote their services here, will stand before the judges tomorrow, the Public Prosecution announced yesterday. This was unfolded on Thursday when pictures of both women, who are reportedly European nationals, were circulated online.

The circulated nude footage were screenshots of one of the women’s account on Snapchat; a social media application that the women apparently used to attract customers to have sexual intercourse with them in return for certain amounts of money. The footage are believed to be taken on one of Muharraq’s coasts, as Shaikh Isa bin Salman Causeway in Muharraq is visible in the background.

The inappropriate pictures raised nationwide anger on local social networks, with many netizens demanding deterrent punishment against the women, considering their act as a blatant violation of the Kingdom’s laws, norms and conservative nature. A few hours later on the same day, the Public Morals Protection Unit in Interior Ministry confirmed the arrest of both women, as well as a Bahraini man who’s reportedly also involved in the incident.

The news was announced by Interior Ministry on its official page on Twitter, stating: “Commenting on pictures that are violating public morals and was circulated on social media networks, the Public Morals Protection confirms the arrest of two foreign women who committed acts that are violating public morals, as well as a Bahraini man, 28, who was involved in the incident by using his car. The necessary legal measures have been taken.”

More information on the incident was unveiled yesterday when the Public Prosecution issued a press statement, in which, Capital Governorate Chief Prosecutor Isa Al Ajman confirmed that the women had posted the pictures online to “persuade her potential customers to practise prostitution”. Mr Al Ajman clarified that the Public Prosecution had completed its investigation into the incident after interrogating all three suspects and confronting them with the pictures, which confirmed that they have committed the offence.

The Chief said in his statement that the suspects are charged of publicly committing an immoral act, practicing prostitution and promoting it, and sharing and possessing pornographic materials, adding that they have been remanded and will stand before the Minor Criminal Court on December 4, 2019.