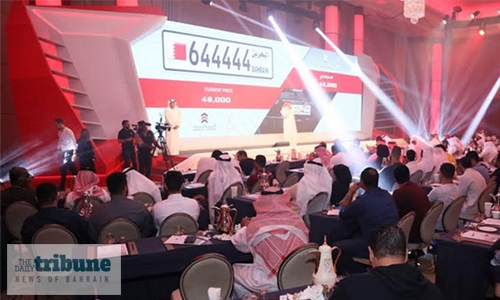 A unique car registration was recently sold for a whopping sum of BD76,000 at an auction held. Mazad revealed that a grand total of BD564,000 was received at the auction. The event was the fourth public auction organised by Mazad in co-operation with Arabian Auction.

The organisers stated that the auction was a great success.  The registration (655555) was the highest earning number, which was sold for BD76,000. It was sold after an intense competition from participants. Participants from various GCC countries were part of the auction.

The number 644444 came second with a value of BD67,000, followed by the number 650000, which went for BD65,000. On this occasion, Talal Al Araifi - Chief Executive Officer of Mazad, congratulated all the winners of the special numbers. He praised the efforts of Arabian Auctions and for their close co-operation for the success of the event.

The auction that aims to cater to a variety of collectors’ tastes, comprised 25 numbers from a new set of unique vehicle licence plates starting from 640000 and 650000.

GFH sets aside $200m to tap into private education sector