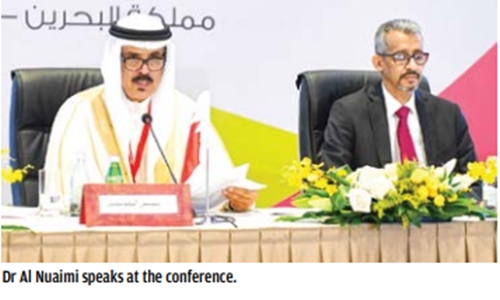 Under the patronage of His Majesty King Hamad bin Isa Al Khalifa, Bahrain hosted the 11th Arab Education Ministers Conference under the theme “Educational Policies and Their Role in Achieving the Fourth Goal of SDGs 2030”.

He wished the new Director General of ALECSO Dr Mohammed Weld Omar every success, thanking the former Director General Dr Saud Helal Al Harbi for his efforts and stressing the kingdom’s full support to the organisation. The Education Minister affirmed that joint Arab educational work will boost the efforts made to achieve the fourth goal of the sustainable development goals (SDGs) which is guaranteeing good, fair and comprehensive education and promoting lifetime educational opportunities for all.

He pointed out that this goal was endorsed by the UN member states as part of the organisation’s plan 2030. He stressed Bahrain’s strides in achieving the goal, citing steps taken in this respect. ALECSO Director General Dr Mohammed Weld Omar congratulated Bahrain on the centenary of its regular education, stressing the importance of the event in showing the kingdom’s leading educational status.

He also pointed out that holding the periodic conference is congruent with the implementation of the organisation’s new strategic plan. A photo gallery was held on the sidelines of the conference casting light on the history of education in Bahrain. The exhibition also brought under the spotlight distinguished projects by Bahraini students mainly in digital empowerment and artificial intelligence.