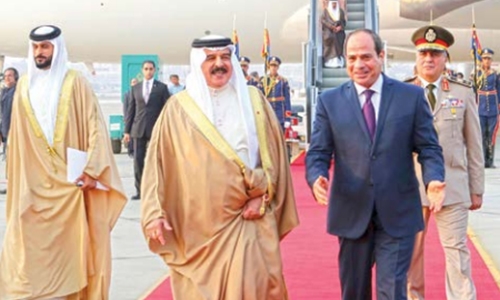 Egypt ties ‘at all time high’

His Majesty King Hamad bin Isa Al Khalifa held an official meeting in Cairo on Thursday with Egyptian President Abdel Fattah El Sisi. HM the King thanked him for the gracious welcome and hospitality accorded to him and his accompanying delegation. The Egyptian President hailed HM the King’s visit, expressing appreciation of fraternal ties of co-operation binding Bahrain and Egypt, praising the Kingdom’s inherent stances towards Egypt and its people.

Both leaders reviewed bilateral relations and ways of bolstering them at all levels for the common interest of both countries and peoples. HM the King praised deep-rooted historical relations between Bahrain and Egypt, stressing mutual keenness to bolster bilateral co-operation and co-ordination to face regional challenges. His Majesty lauded the development march in Egypt and the quantum achievements brought about in various sectors under the leadership of President Abdel Fattah El Sisi.

HM the King also commended Egypt’s unwavering stances in supporting the Kingdom of Bahrain and its decades-long contribution to the Kingdom’s development march. HM the King hailed the pioneering historic role of Egypt in protecting the Arab national security and defending Arab issues and interests. His Majesty also praised Egypt’s key role in boosting peace, security and stability in the Middle East, stressing the importance of resolving the issue of Sadd Al Nahda (Renaissance Dam) to ensure prosperity of relevant countries and safeguard Egypt’s water security.

The Egyptian President hailed the pioneering efforts of HM the King in bolstering bilateral relations, describing those relations as a distinguished model of co-operation between brotherly countries. His Majesty praised Bahrain’s honourable role, spearheaded by HM the King, in supporting pan-Arab work. HM the King also lauded HM the King’s wise stances regarding regional issues, stressing Egypt’s unwavering stance concerning security of the Arabian Gulf, being an integral part of Egypt’s national security. Both leaders discussed regional and international developments as well as issues of common concern.

They hailed Riyadh Agreement between the legitimate Yemeni government and the Southern Transitional Council. They commended the efforts of the Custodian of the Two Holy Mosques and his Crown Prince in settling the Yemeni crisis and restoring security and stability all over Yemen so as to foster regional peace and stability. They thanked Yemeni President Abdrabbuh Mansur Hadi and his government as well as the UAE government for facilitating the pivotal agreement which will back efforts towards a comprehensive political settlement.

Both leaders expressed hope the agreement would rally the Yemeni ranks to face threats and challenges and work together to tackle the repercussions of the Houthi coup and deter threats to Yemen’s unity and stability. They also underscored the need to boost co-operation between the Arab countries to maintain their security and stability and confront challenges, including mainly terrorism, extremism and foreign interference. They also affirmed the need for synergised efforts to work out peaceful solutions to crises in the region and promote security, stability and prosperity.

‘Akhand Path’ set to be held