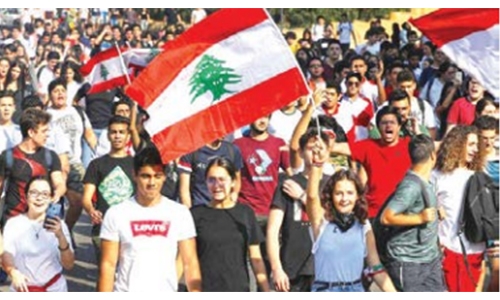 Thousands of high school students across Lebanon skipped classes yesterday for a third day in a row to carry on the flame of the country’s anti-graft movement. Lebanon has since October 17 been gripped by massive cross-sectarian protests demanding a complete revamping of a political system they say is corrupt and inept.

With youth unemployment running at over 30 per cent, school students have joined en masse since Wednesday demanding a better country so they don’t have to emigrate. Across Lebanon, students protested outside state institutions and banks including in the southern city of Saida, Tripoli in the north and the east’s Baalbek.

What started as a spontaneous and leaderless movement has become more organised in recent days, with protesters targeting institutions viewed as particularly inefficient or corrupt. Early Friday, dozens of activists and retired army officers for the first time briefly closed down the entrance to Beirut’s port.

Egypt ties ‘at all time high’