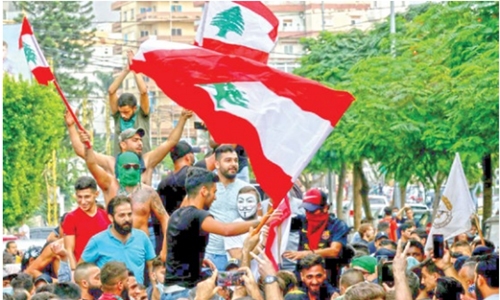 Saudi Arabia’s embassy in Beirut  yesterday warned its citizens not to travel to Lebanon, and called on Saudi nationals already in the country to avoid protest areas.  The Kingdom’s embassy in Beirut advised its nationals to be extremely cautious and to “stay away from places of protest,” Al Ekhbariya news channel reported.

It also announced that the Lancaster Plaza Beirut hotel in the capital’s Raouche neighbourhood is a gathering point from which Saudi nationals can be transported to Beirut airport.  Egypt’s embassy in the Lebanese capital Beirut also called on its nationals in the country to avoid protest areas, Egyptian state news agency MENA said. “The embassy calls on all Egyptian citizens in Lebanon to avoid the areas of gatherings and protests, to be careful in their movements and to abide by the instructions of the Lebanese authorities in this regard,” MENA said.

Protesters across Lebanon blocked roads with burning tires on Friday and thousands marched in Beirut, calling on the government to resign over an economic crisis. Meanwhile, Lebanon’s prime minister gave his partners in government a 72-hour ultimatum to come up with “convincing” solutions for a rapidly worsening economic crisis, as nationwide protests against the country’s entire ruling political class continued to escalate.

In an address to the nation and with hundreds of rowdy protesters camped outside his office, Saad Hariri blamed politicians in his national unity government, which includes the Iran-backed Hizbollah group and rival political parties, for blocking his reform agenda at every turn. Following his speech, groups of rioters broke away from the protesters, clashing with police, setting cars ablaze and smashing store windows in the streets of Beirut.